Writing myths are the so-called universal truths about writing, followed by the words “every writer should know.” If there is anything universal about them, it’s the damage they cause to your creative process and your determination that put your thoughts on the blank page before you. Some of them can be discouraging and quite deadly – in the sense that they will literally stop … END_OF_DOCUMENT_TOKEN_TO_BE_REPLACED 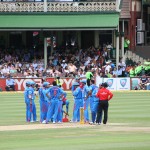 The Cricket World Cup is in full swing and any cricket fan will definitely be watching all the interesting matches. But there are a lot of things that writers can learn from the World Cup as well! Read on to learn more. 1. Perseverance pays The Afghanistan cricket team has only one word for it: perseverance. From a war-torn country with complete lack of facilities, here is a … END_OF_DOCUMENT_TOKEN_TO_BE_REPLACED

It’s May 2013. I’m sitting in a café in Nova Scotia, Canada, checking my emails, sipping on a cup of tea. My two brothers are there, too. We haven’t seen each other for a while, and they’re talking about music again. I can never keep up when they do this. Every band they mention is so obscure it sounds as if they’re making them up on the spot. Their conversation goes something … END_OF_DOCUMENT_TOKEN_TO_BE_REPLACED

by Zarina de Ruiter With literary lunches, writing workshops and musical interpretations of classic tales, March is set to be a bumper month of bookish fun – and we have compiled a handy list for you of some of the most exciting upcoming events for readers and writers. 1 - 30 March – With over 60 events across Essex Book Festival, this month-long literary event will have … END_OF_DOCUMENT_TOKEN_TO_BE_REPLACED

Bestselling authors and Novelicious favourites including Liane Moriarty, Lucy Diamond, Paige Toon, Cathy Bramley, Miranda Dickinson, Lucy Robinson and Rachael Lucas are offering fans the opportunity to have their name appear in their forthcoming novels. They are amongst over 70 popular authors who are taking part in this year’s Get in Character eBay auction, an annual … END_OF_DOCUMENT_TOKEN_TO_BE_REPLACED