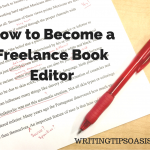 If you want to become a freelance book editor, there’s no better time to do so than the present. Just take a look at the following figures... Since 2007, the number of books published annually in the United States has increased from around 600,000 to in excess of one million books per year. Of those, around 300,000 books are published annually by publishers, while the … END_OF_DOCUMENT_TOKEN_TO_BE_REPLACED