As the year draws to a close, we see a considerable slump in reading and writing events across the UK. Most people will be busy wrapping gifts (books, obviously), writing Christmas cards and generally spending a lot of times indoors curled up with an engrossing novel while listening to some festive tunes. However, if you are are going to pop out and brave the weather anyway (perhaps to do some last-minute shopping for literary presents), why not check out one of the book events happening this month? There are some seasonal crackers! 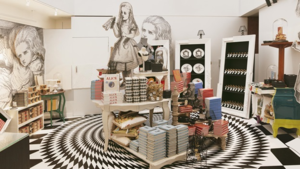 December – The Alice in Wonderland exhibition at the British Library in London is well worth a visit. First you stumble into Wonderland with an illustrated journey through the iconic story, before getting to ooh and aah over the original manuscript handwritten and illustrated by Lewis Carroll and a host of other exciting behind-the-scenes snippets of the classic tale, bringing you right back to the 21st century. The exhibition is completely free and running until April 2016, with a dedicated pop-up shop (which is amazing by the way) until January 2016.

3 December – If you are in London or can get to the city this week you're in for a real treat as Waterstones Piccadilly is hosting their annual free Christmas Extravaganza with authors from the likes of Laura Barnett, Jonathan Coe, Zoe Gilbert and many more. There will also be music, poetry reciting, cocktails, music and lots of other festive joy.

3 December – If London is too far south for you, perhaps the Christmas Cracker event at Edinburgh West End Waterstones is more up your alley. There will be readings from authors Lucy Ribchester, Catherine Simpson, Chris Close and Angela Jackson and festive tipples to boot!

4 December – Christie Barlow will be in store signing copies of her new book The Misadventures Of A Playground Mother at Waterstones Wrexham.

5 December – Have you been trying to get an agent for yonks but haven't had any success so far? How to Hook an Agent is a half-day event with workshops on finding the right agent, submission packages and how to pitch your novel. There will be agents in attendance going over the dos and don'ts of the process, followed by 10 minute one-to-one sessions where you have the opportunity to pitch your book to an agent yourself! Tickets are £149.

7 December – After the incredible success of Me Before You (to be released as a film in 2016), the much-anticipated sequel, After You, came out earlier this year. Author Jojo Moyes will be talking about both books during 'An Evening with Jojo Moyes' in Amersham (Buckinghamshire). Tickets are £12 and include a copy of After You. 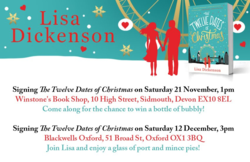 8 December – The Author's Club is organising a lunch with writer Lucy Beresford at the National Liberal Club in London. Tickets are £28.50 and include a two-course lunch as well as a glass of wine.

12 December – Are you in or near Oxford? Then you're in for a treat as Lisa Dickenson, author of the stonkingly hilarious The Twelve Dates of Christmas will be signing copies of her book at Blackwells. There will even be port and mince pies to get you in the festive spirit!

And that's it for the year, I hope you have a brilliant holiday time and a fab start to 2016! I'll be back in January with a host of bookish events for your diary, so please comment below or tweet me on @zarinatweets if you'd like me to include yours.