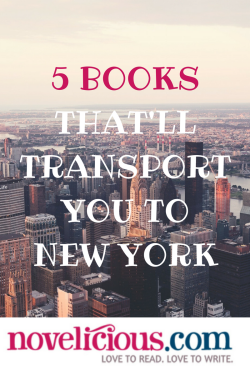 A few weeks ago we interviewed Katy Colins for our first Novelicious Weekend Interview. We loved chatting to her so much that we asked her to be part of Team Novelicious. So, here she is with the first of her monthly features that focuses on books in different locations.

To kick off this new series it was only right we pay homage to the Big Apple, the city that never sleeps and the destination that has inspired many authors. I may never have set foot in NYC (yet!) but through my love of books I feel like I’ve been on an American adventure with so many characters. Taking in Central Park, soaking up the buzz of Times Square, climbing the dizzy heights of the Empire State Building and even flashing the cash on 5th Ave

Here are five of the best books to transport you to the city so nice they named it twice:

Angela Clark fell for the dreamy delights of New York in the first of the bestselling I Heart series. Of course it makes sense to head to the city where dreams are made after you've had your heart broken and you’re feeling a little jaded with your life. Lindsey’s hilarious and heart-warming writing will make you look up flights faster than you can warble Empire State Of Mind.

Miranda paints such incredible pictures with her words that after reading this you’ll feel like you’ve been on a trip with a group of new friends who you don’t want to say goodbye to. Through her warm writing you’ll explore the streets of this city along with lovable Bea and hottie Jake as if you have two expert tour guides in your pocket. From bookshops in Brooklyn and ponds in Central Park, I’ll Take New York is a fantastic modern fairytale set in this urban jungle.

One Wish In Manhattan, Mandy Baggot

Spending Christmas in New York is on the travel bucket list of many and if it’s not then it will be after reading this gem of a novel. The sparkling lights, snow drenched streets and festive atmosphere make the perfect backdrop for this lovely story about a mother hoping to make her daughter’s wishes come true, not realising she may be in for a treat herself. 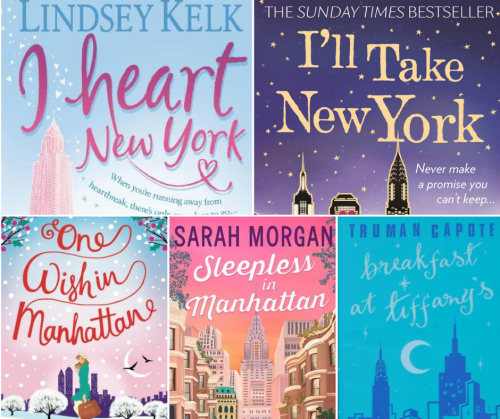 ‘What if the person who broke your heart, is the only one who can help you find your future,’ Sleepless in Manhattan is the perfect new York love story from the queen of New York novels. Sarah writes with such ease about a city she truly loves that a few pages in to Paige’s story will have you working out how much holiday leave you have left to hot foot it over the Atlantic to experience it all for yourself.

This classic story will have you dreaming of dripping in diamonds. Breakfast At Tiffany’s, set in the upper east side of Manhattan, is where we’re introduced to the troubled but fascinating Holly Golightly. This novella packs more of a punch than the iconic film, which propelled the career of Audrey Hepburn, and is well worth a read.

Which of these have you read? What other novels set in New York would you add to this list?