Eve White launched her literary agency in 2003 after working as an actress for 20 years. Recently shortlisted for the Agent of the Year Award in the Bookseller Industry Awards, her clients include the likes of Jane Shemilt, Ruth Ware and Saskia Sarginson. Here, Eve tells us what she’s hoping to find in her submissions. 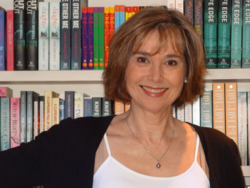 I am always on the lookout for great writing, whatever the genre or age range. In the years that I have worked as an agent I have found a number of very talented writers in our submissions inbox. Saskia Sarginson sent her debut novel, The Twins, in this way. I edited the novel with her to make sure that it was as polished as it could possibly be before sending it out on submission. It was published as a Piatkus Debut Super Lead title in 2013 and was chosen by Richard and Judy for their Autumn Collection. Saskia’s books have sold in 14 territories, and we have just now sold her third novel The Other Me to Flatiron Books in the US.

Yvvette Edwards’ A Cupboard Full of Coats, which went on to be long-listed for The Booker Prize, was also discovered in our inbox. Yvvette’s second book The Mother will be published by the new imprint, Mantle, at Macmillan and has just sold to HarperCollins US.

I am keen to take on wonderful debut authors, and support them in their writing career. Jane Shemilt has now sold over 250,000 copies of her debut Daughter (Penguin) and was the UK’s best-selling debut author of 2014.

I only take on books that I really believe in, which means I can give each of my clients the time and attention they deserve. We read anything and everything that our clients send to us and will always give them as much editorial advice as they need. I will never send out a novel to publishers until I think we have edited it to a publishing standard.

I have always had an open door policy with unsolicited submissions, as you never know where you might find the next gem. Anyone can submit to us through our website www.evewhite.co.uk.