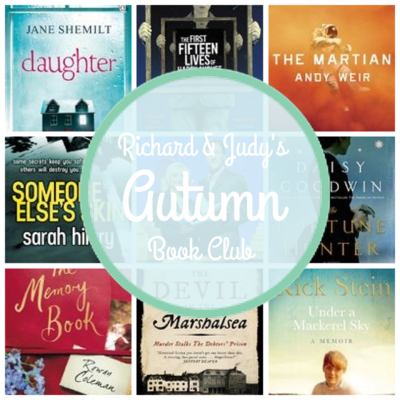 The books for Richard and Judy’s Autumn Book Club were revealed today, featuring a list of eight brilliant and incredibly varied novels.

Six of the eight have been penned by women, too, with favourites including The Memory Book by Novelicious Author of the Year Rowan Coleman.

Kicking off the Autumn Book Club will be Daughter by Jane Shemilt, before the remaining seven titles: The First Fifteen Lives of Harry August by Claire North, The Fortune Hunter by Daisy Goodwin, The Martian by Andy Weir, Someone Else’s Skin by Sarah Hilary, The Memory Book by Rowan Coleman, The Devil in Marshalsea by Antonia Hodgson and Under a Mackerel Sky by Rich Stein.

Autumn doesn’t seem quite so bad now, does it? Have you read any of these books already? Which will you be starting with?