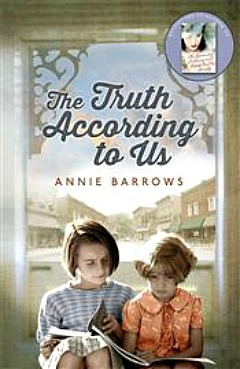 We talk about The Guernsey Literary and Potato Peel Society by Mary Ann Shaffer and Annie Barrows fairly often here at Novelicious. Just last month it was named one of our top five books of the century so far, in fact. Imagine our delight then when our attention was drawn (by Cesca – loudly and with great excitement) to a tweet from Ben Willis, head of Transworld digital publicity, yesterday.

Naturally, we had to find out more.

Titled The Truth According to Us, the long-awaited historical fiction novel will be published on Thursday 18 June and will be set in a small town in West Virginia. Here’s what we know about it:

1938, Macedonia – a small-town in West Virginia: twelve-year-old Willa Romeyn is awaiting a visitor from the North, a Miss Layla Beck of Washington DC, senator’s daughter and debutante, who has been packed off to West Virginia for disobeying her father’s wishes. Layla is to be a researcher for the Federal Writers’ Project, for which she must investigate the long years of Macedonia’s uneventful past …

When Layla secures a room with Willa’s eccentric family she finds herself irresistibly drawn into their tangled history. Who caused the fire at the American Everlasting sock factory? Why does Aunt Jottie always look so sad? Where does Felix Romeyn disappear to every night, leather suitcase in hand?

Willa helps Layla dig out secrets that reveal an altogether different story, one that has left hearts and lives devastated. Can they begin the re-telling, not only of the Romeyn family’s past, but also of their future?

What do you think? Have you read The Guernsey Literary and Potato Peel Society? Will this book be on your June wishlist?