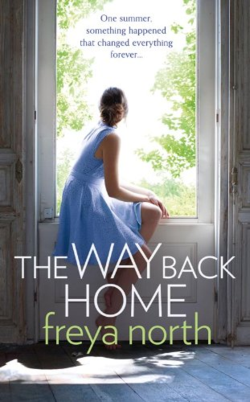 It’s always a good week when you discover the pretty covers and tantalising blurbs of not one but two new books from a pair of your favourite authors.

First up is The Way Back Home by Freya North, which is scheduled for release on June 5 2014. Freya, whose previous novels have included Sally, Pillow Talk and Secrets, tweeted a link to the new book’s Amazon page yesterday saying: ‘Blimey – it must be happening if Amazon says it is…’ We hope it's happening because it sounds brilliant.

One summer, something happened that changed everything forever…

We were who we were, the children of Windward – a little ragtaggle tribe defining the ethos and eccentricity of the place…

Born and brought up in an artists’ commune in Derbyshire, Oriana Taylor had freedom at her fingertips in a home full of extraordinary people.

The Bedwell brothers, Malachy and Jed, shared their childhood and adolescence with Oriana. In the rambling old house and tangled grounds, their dreams and desires could take wing unchecked.

But too much freedom comes at a price. Something happened the summer they were fifteen. And now, having been gone eighteen years, Oriana is back.

This is their story.

Next up is The Woman Who Stole My Life by Irish chick lit favourite Marian Keyes, which is scheduled for release in November. (We’re not usually ones to wish for winter before we’ve even had a summer, but we could make an exception for this.) The cover is available to view on Curtis Brown's website with the blurb promising a fun and heartfelt read in true Keyes style.

Stella Sweeney is back in Dublin. After living the dream in New York for a year – touring her self-help book, appearing on talk shows all over the USA and living it up in her 10-room duplex on the Upper West Side – she's back to normality with a bang. And she's got writer's block.

Stella wants a clean break as she didn't exactly leave New York on a high. Why is she back in Ireland so soon? Who is it who keeps calling? Stella wants to get back to being the woman she used to be. But can she? And should she?

Sweet, sweet anticipation. Which title are you most excited about?