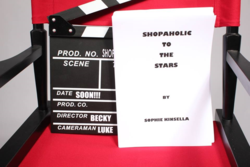 There was a lot of over excited, fan-girl squealing at Novelicious HQ last night following an announcement from Sophie Kinsella about her new book.

The chick lit author took to her Facebook page to announce the new novel, which will be titled Shopaholic to the Stars and will be released this coming autumn.

Sophie said: “And… action! I am SO excited to announce the title of my new novel, coming this autumn! Yes it’s true: Becky, Luke, and the rest of the gang are back in… Shopaholic to the Stars.”

She continued: “I had so much fun spending time with them again and I just can’t wait for you to read about their adventures in Hollywood. Stay tuned on Twitter @kinsellasophie for sneak peeks, contests, and much more in the coming months.”

The official cover is yet to be released (don’t you worry your heads, book nerds, we’ll get on the case), but we can tell you that Shopaholic to the Stars will probably be totally awesome – as all Sophie Kinsella books are. Here's a sneak peek of the blurb:

Becky Brandon (née Bloomwood) has stars in her eyes. She and her daughter, Minnie, have joined husband Luke in LA – city of herbal smoothies, multimillion-dollar yoga retreats, and the lure of celebrity. Luke is there to help manage the career of famous actress Sage Seymour – and Becky is convinced she is destined to be Sage’s personal stylist, and go from there to every A-list celebrity in Hollywood! But things become complicated when Becky joins the team of Sage’s archrival. How will charming and supportive Luke deal with this conflict? Is it possible that what Becky wants most will end up hurting those she loves most? Shopaholic fans old and new will devour Sophie Kinsella’s newest adventure!

Is it autumn yet?