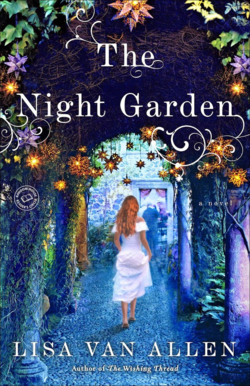 Olivia Pennywort is the peculiar owner of the Pennywort farm, located in a valley in New York. Well-known for the wondrous maze stretching the length of her property, which is rumoured to help visitors find the answers to life's most difficult questions, and notorious for giving a place to stay to wandering women, nicknamed 'Pennyloafers', who work on the farm in exchange for food and board, Olivia keeps to herself – though few people know the reason why she is rarely seen out and about, and why nobody is allowed to touch her skin.

When her childhood best friend and teenage sweetheart, Sam Van Winkle, returns to the valley, Olivia slowly comes out of her shell and after rekindling their friendship she even trusts him with her big secret. I won't say what the secret is as for a large part of the novel it's just alluded to, not confirmed, but when I read the true nature of Olivia's reclusiveness I was disappointed that it wasn't anything more plausible and thought through. I expected the story to be magical, but this was too fantastical and far-fetched even within the realm of fiction the book is set in.

The characters, too, didn't ring true to me, from Olivia with her strange connection to the maze to hero wannabe Sam. Not to mention their unbelievable relationship, which was doomed from the start and so obviously unwise to continue on with. And I haven't even mentioned Olivia's selfish and dependent father yet, whose actions made me angry for so many reasons. With an implausible plot and flimsy characterisation I, for the large part, found this novel an effort to finish. The final quarter of the book in particular was ludicrous and I rolled my eyes at the course of the story more than once.

Having said that, there was an ethereal quality to the way author Lisa Van Allen so delicately described the botanical setting of The Night Garden; her words flowed together to create beautiful prose. It's just unfortunate that the end result didn't work on many levels. For readers to be able to resonate with Olivia and Sam, there should've been more of a focus on telling a compelling story than on how the story was told.