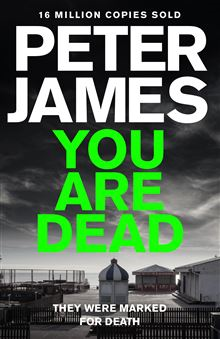 The last thing you expect when you are on a call with your fiance is for it to abruptly end with her screaming and then deadly silence. Logan has always worried about someone lurking in the dark shadows of their flat’s underground car park and now his worst nightmare has come true. Time is of the essence for the police when it comes to a possible abduction.

Across town diggers are breaking ground on a new development and the last thing they expect is to dig up human remains. Work stops immediately and the discovery is called in. Unfortunately time has run out for this poor girl and the police have a cold case to investigate.

Roy Grace and his team have no reason to believe the incidents are connected but then another missing girl and a further grisly helps them piece things together. It is looking more and more like Brighton could have a serial killer on their hands.

I was introduced to the Roy Grace series by a friend a few years ago and after devouring Dead Simple I set to work finding the books I had missed. Once I was caught up I had to very impatiently wait for the next installment as Peter James is a master of cliffhangers. You Are Dead is book 11 and if you have not come across Roy Grace yet then you are in for a treat. I am majorly jealous that you have all of those books to enjoy and I would strongly suggest that you start at the beginning. Each book deals with fresh cases, but it is Grace’s personal life that is as gripping as any murder he investigates. The mysterious disappearance of his wife Sandy has haunted Grace over the years, but now that he has re-married and is planning a move to the country with their new baby son, he is trying his hardest to put his sadness behind him.

The only slight niggle I have about this book was that there were a lot of character names that were the same as famous people or authors. This annoyed me and hopefully next time round Mr James can use more original names. The one celebrity aspect I did love was the fact that a body was found at the Big Beach Cafe – a real-life Brighton hang out owned by Norman Cook (aka Fatboy Slim). Including the superstar DJ on his book tour is inspired too!

If you are up to date and ready for this book then you will not be disappointed. Rather than losing steam this series is going from strength to strength. I found this the most chilling Roy Grace case ever. At times I was really freaked out especially as the book hurtled to a climax at breakneck speed. You Are Dead is one of the best in the series and manages to stand out amongst the often crowded thriller genre. The next book can’t come quick enough!