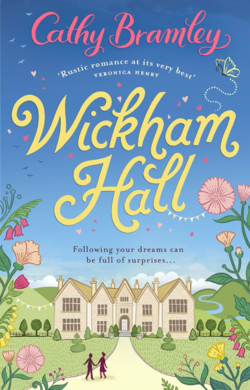 Looking for a light and lovely read to escape the January drudge? May we suggest Wickham Hall by Cathy Bramley? Originally published as a four-part e-serial, the shiny new paperback was published today.

Holly Swift has just landed the job of her dreams: events co-ordinator at Wickham Hall, the beautiful manor home that sits proudly at the heart of the village where she grew up. Not only does she get to organise for a living and work in stunning surroundings, but it will also put a bit of distance between Holly and her problems at home.

As Holly falls in love with the busy world of Wickham Hall – from family weddings to summer festivals, firework displays and Christmas grottos – she also finds a place in her heart for her friendly (if unusual) colleagues.

But life isn’t as easily organised as an event at Wickham Hall (and even those have their complications…). Can Holly learn to let go and live in the moment? After all, that’s when the magic happens…

Pop along to wish Cathy a happy publication day on Twitter and Facebook, or visit her website for more information. And stayed tuned for a celebratory competition coming up later today!