Jamie Ford's second novel, Songs of Willow Frost, is the follow up to his international bestseller, Hotel on the Corner of Bitter and Sweet – one of the US World Book Night titles this year. Songs of Willow Frost is about Henry Lee who is enjoying a less bleak day than usual as an inmate at Seattle’s Sacred Heart Orphanage when he glimpses an actress on the silver screen he is convinced is his mother. We will be reviewing this book set in the Depression-era, early Hollywood scene and the Chinese-American tension soon. 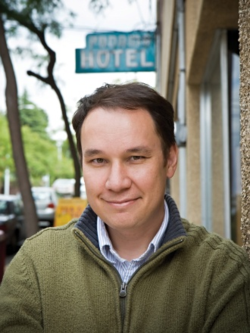 I wish I had some Hunter S. Thompson-esque writing day to share – you know, wake up in a jail cell, get bailed out by a showgirl, go sit at the racetrack where I bet and drink all day while banging away at a manual Olympia, using my loaded .38 Special as a paperweight. The reality isn’t quite so sexy. Typically I’m up early, clearing through emails and correspondence, writing from 8:00-11:00am. Then I edit through the afternoon. Once in a while I’ll go completely buck-wild and write at the public library.

Wow, I grimaced just reading that question so I guess the answer would be a resounding no. In the US, reality TV is the new form of “celebrity”, which isn’t much to draw upon. I guess I just channel my own angst-filled childhood. That’s a well that will never run dry.

Please Look After Mom by Kyung-Sook Shin. Some books change us. They change the way we look at ourselves, the way we interact with those closest to our hearts – the way we’ve loved those people, or the way we’ve missed them or honored them or taken them hopelessly for granted. This is one of those books. This is a book that alters the way we remember.

I work from a premise – basically a beginning and an ending, and I make up the juicy middle as I go. But that ending is incredibly important to me – it becomes my magnetic north. If I love a chapter, but can’t weave my way to the ending, I cut those pages, backtrack and find another way. And I edit as I go, so when I’m done, I essentially have one draft.

Stephen King talks about sitting down with a blank page and just writing extemporaneously. I love to do that, but I invariably end up with 80 pages leading to a dead end. For us mere mortals a little pre-planning is probably a good idea.

Hmmm…I was your classic closet novelist. I wrote on weekends and evenings, just fumbling about, really. Then I finally began spending my time (and money) to attend writing conferences, in places like Virginia and Squaw Valley. That’s when I started considering this whole writing thing as an actual vocation – I began reading as a writer, began breaking down what I liked and disliked, that kind of thing. I wrote Hotel on the Corner of Bitter and Sweet, began shopping it to agents, and made a tremendous leap of faith (and now here I am talking to you).

That literary fame is actual fame. Nothing could be further from the truth. Writers are very normal people, doing a very normal thing. Now if you’ll excuse me, my stretch Escalade is here – I’m late for my three-o-clock twerking lesson with Miley Cyrus…

That being a writer is like being given a box of a million crayons. The hardest part at first is just choosing what colours to draw with. I laboured at that juncture for years, writing to fulfil the expectations of others. I wrote the dreadful literary nothings that I imagined I was suppose to write. To quote the highly quotable Harlan Ellison, “You should write for the most intelligent, wittiest, wisest audience in the universe: Write to please yourself.”

I’m currently working on a new novel about a boy who was raffled off at the 1909 World’s Fair in Seattle. (That actually happened!) I don’t have a title yet but I do have a deadline, so as I get closer, hopefully the title will manifest. Oh, and I need a nap. I think I have one scheduled for next year.