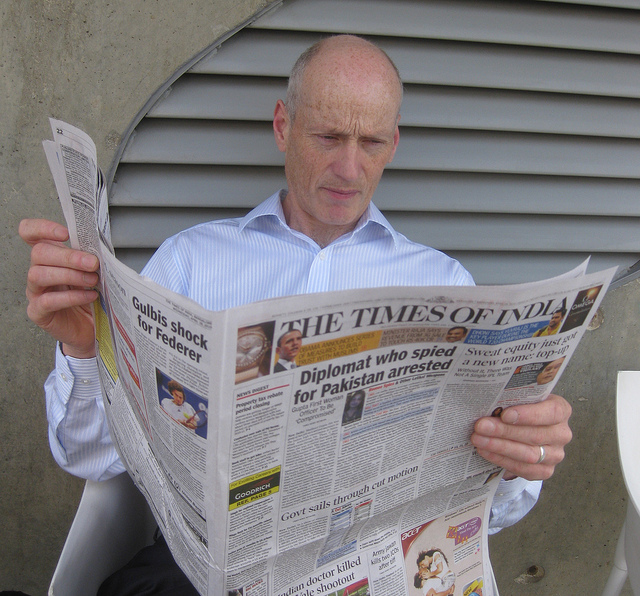 If you’re a budding journalist who wants to write news stories, columns or features for newspapers and magazines or report on news for television, it’s always helpful to have sources of inspiration close by. One of the best forms of motivation can be other people who’ve walked the path you’ve just started. This article shares tales about 5 inspirational journalists who have had successful careers in their chosen profession. If they can, so can you.

Madhu Trehan is a veteran journalist, renowned for giving India her first English magazine in the form of India Today, which she co-founded with her father Vidya Vilas Purie in 1975. A true pioneer in the field of investigative journalism, with strong entrepreneurial flair, she also produced the Newstrack magazine with her brother in 1988, which at the time was India’s first video news magazine.

Madhu in 2009 authored the nonfiction book entitled Tehelka as Metaphor: Prism Me a Lie, Tell Me a Truth. Credited for being extensively well-researched, the book chronicles the Operation West End exposé in 2001 and what happened after the event. For those who don’t know, the Tehelka website carried out an undercover operation named Operation West End, which exposed corruption in the armed forces and amongst senior officials in politics, who took bribes in a deal involving arms.

In 2012, Madhu along with co-partners founded Newslaundry.com a dedicated online news website, an ideally named resource, which is based upon the innovative concept of reporting and critiquing the very sector whose job it is to report on what is happening in the world – the press itself!

Journalist Lesson – If you have bigger dreams than to just be a journalist who writes, then remember the world is your oyster. How could you actually start-up your own publication?

Born in 1965 in Gujarat and a graduate of St. Xavier College, Mumbai and of Oxford University, Rajdeep Sardesai has had an illustrious career in journalism. His roles have included working for The Times of India over a period of 6 years where he was Mumbai city editor. He moved into television journalism in 1994 working as Political Editor for NDTV before forming his own company Global Broadcast News (GBN), in collaboration with CNN and TV18.

Most recently, Rajdeep worked as Editor-In-Chief of IBN18, a position from which he stepped down this year, so that he could take on the role of Consulting Editor at the India Today Group and also complete his book entitled 2014: The Election that Changed India. This title contains stories of the Indian General Election that happened earlier this year, culminating with Narendra Modi winning it, and becoming Prime Minister. Rajdeep’s book can be pre-ordered from major online retailers including Amazon.in. Rajdeep also continues to write columns for newspapers including The Hindustan Times.

Journalist Lesson – A journalist can transition from one who writes, to one who presents on television. If this sounds like what you want to do, then what is stopping you? What do you need to do to make the transition to television?

If you’re looking for inspiration from a top business journalist, then there’s no one quite like Sucheta Dalal. Sucheta is a renowned financial journalist who has been awarded the Padma Shri for Journalism in 2006. Padma Shri happens to be one of the highest civilian awards in India.

She started off her career in journalism in 1984 working for Fortune India. Her other roles over the years include working for Business Standard, The Economic Times and as Financial Editor for The Times of India. A specialist in investigative journalism reporting on financial scandals, Sucheta in 1993, co-authored her first book with her husband entitled The Scam: Who Won, Who Lost, Who Got Away, which is about an alleged financial scam that took place in the Indian stock market in 1992.

In 2000, Sucheta published a biography of Ardeshir Darabshaw Shroff who in India during the 1950’s was considered a financial guru. This book is entitled A. D. Shroff: Titan of Finance and Free Enterprise. Sucheta is also co-founder of Moneylife, which is a fortnightly magazine, covering areas such as personal loans, stock, real estate, taxes and insurance. There is also a corresponding Moneylife.in online magazine where you can get daily news and information on areas, which among others include investing and savings.

Journalist Lesson – If there is particular niche that you specialize in, either through your educational background of through interests (or both), then you could very well carve out a career as a journalist out of it.

Kanchan Gupta was raised in Jamshedpur and Patna and graduated from St Xavier’s College, University of Calcutta where he studied English literature, political science and economics. He went to work as a sub-editor in 1982 for The Telegraph in Calcutta before going on to be the youngest ever Assistant Editor of the The Statesman.

Extremely versatile, during the 90’s, Kanchan Gupta left journalism to pursue an advisory role in the Prime Minister’s Office; at that time the government was headed up by Atal Bihari Vajpayee. In 2004, he came back to journalism and currently has weekly columns in both The Pioneer and MidDay. Kanchan writes on regional and national politics, security issues and on international current affairs.

Journalist Lesson – Getting established as a journalist for some serious publications can definitely be the stepping stone for other influential roles that you might want to get into, in the future.

Born in 1955 in Calcutta, Swapan Dasgupta is educated to PhD level and his work experience includes a position as a research fellow at University of Oxford. He began his career as a journalist in 1986 at The Statesman and has gone onto hold senior editorial positions at this newspaper and others including The Times of India, The Indian Express, and The Daily Telegraph in Calcutta.

In addition to being published in all the major Indian newspapers, he’s also held the position of Managing Editor at India Today. Swapan is also a well-recognised television figure, participating in political debates on channels including NDTV and CNN-IBN.

Journalist Lesson – Do you have dreams of being published in every major newspaper and/or magazine? With hard work, and proper networking with people in the sector, anything is possible.

Image credit: Phil Whitehouse on flickr and reproduced under Creative Commons 2.0[author] [author_image timthumb=’on’]https://writingtipsoasis.com/wp-content/uploads/2014/01/hv1.jpg[/author_image] [author_info]Hiten Vyas is the Founder and Managing Editor of eBooks India. He is also a prolific eBook writer with over 25 titles to his name.[/author_info] [/author]