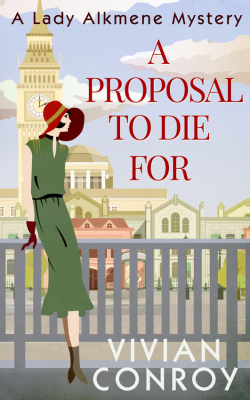 A Proposal to Die For has been described as 'a cross between Downton Abbey and Miss Marple.' It is the first in the Lady Alkmene Callender mysteries set in the 1920s.

We asked the author, Vivian Conroy, what it was about the Roaring Twenties that appealed to her.

The last time I was on holiday and arrived in my usual, family-run hotel, the man behind the desk said that the elevator was broken and I had to lug my suitcase all the way up to the third floor. After I had given him the 'you are kidding, right?' face, he burst out laughing, assuring me it was but a joke. The elevator was fine, but I did have to take the suitcase up myself. There was no ding of a bell on the desk, no bellboy in uniform with gleaming brass buttons moving in to assist me. I longed in that moment for the glamour and luxury of the 1920s.

For a writer such an age is like a treasure trove from which one can keep pulling up new gemstones to show off to the reader.

But it is not all gold that glitters. There was not just the opulence of the (titled) rich, but also the desperate poverty of the back alleys, the criminal behaviour of those clawing their way up from those slums, the position of servants who were of a lower class but nonetheless privy to all the family secrets. These dynamics fascinate me and seemed to me to be a fertile base for a mystery series.

The opening scene of A Proposal to Die For came to me in a flash: a lady in evening dress reaching for a golden lighter on a mantelpiece to relight her cigarette and then overhearing a few whispered words coming from behind an opulent Chinese silk screen. A marriage proposal, but in the same breath a reference to someone who would be better dead if the marriage is to work out.

As I started to type, everything began to click into place: who the lady was, her father (a botanist who traveled the world to find new species of plants and left his only, motherless daughter to find her own way in life), her character traits that made her so suitable for sleuthing: curiosity, a fascination with human psychology and a need to experience something exciting, away from her everyday existence.

But how can a lady with no knowledge of street life investigate crime?

It was clear to me that Alkmene needed a partner, someone who was her opposite in every way. A man, of a lower class, fiercely independent, despising titles and money. Half English, half French, with a secret past Alkmene can't quite put her finger on. Looking back I am not even quite sure how Jake Dubois came to be what he is, but I do know he and Alkmene are amazing together. They can challenge each other and still support each other as they have a common goal: finding the murderer, justice for the victim and discovering an answer to the questions the case raises.

As a fan of period drama and mysteries set in the twenties, I already knew much of the era but it is never a punishment to research details online: one discovers new fascinating tidbits about a world one can't help dreaming about. There is nothing better for me than diving into Alkmene's world and thinking up country manors with snooping servants and precious gems or sending her out to Cornwall to visit an excavation site that turns up more than just dry bones. After all, the tagline for my series is: The twenties have never been so dangerous …

FIND OUT MORE ABOUT A PROPOSAL TO DIE FOR