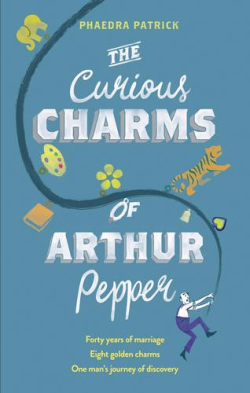 Our new series where we ask the author for the story behind the book.

The Curious Charms of Arthur Pepper is the story of 69-year-old Arthur Pepper.  On the anniversary of his wife's death he discovers, in her possessions, a charm bracelet that he has never seen before. This leads Arthur on an adventure that takes him from London to Paris and India in his quest to find out the truth about his wife’s secret life before they met.

As I showed my own childhood charm bracelet to my son, and told him the stories behind each of the charms, the idea came to me about an elderly man who discovers a mysterious bracelet in his late wife’s wardrobe. I wanted to write a story straight from my heart, and create a character that people would want to cheer, laugh and cry with. I love to collect ideas in my head, so each scene and character in the book was influenced by someone I know, something I’d seen, or personally experienced.

I once holidayed in India and bought a small brass elephant pendant, and this was the inspiration behind the first charm that sets Arthur off on his epic journey of discovery.

In addition I knew I wanted a tiger in my novel and I loved the idea of a lord and lady who live in a crumbling manor house with their tigers prowling around the grounds. I really enjoyed writing a scene where Arthur is accosted by a ravenous tiger in his attempt to find out the story behind the tiger charm on the bracelet.

I wrote the book at a time when I’d had five previous novels rejected, and also after losing a close friend and a family member. I ploughed on with The Curious Charms of Arthur Pepper whilst thinking about how life is for celebrating and living. So whilst Arthur’s journey is sometimes sad, it’s also poignant, funny and uplifting. I felt like I was holding his hand, to help him to get over the death of his wife and to lead him to a better place.

Phaedra’s debut novel The Curious Charms of Arthur Pepper is out in paperback now.