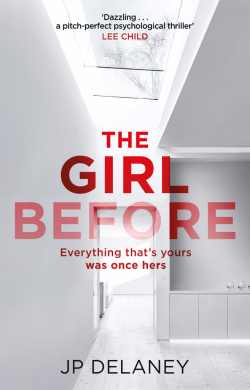 The Girl Before is a psychological thriller from JP Delaney, a pseudonym for a writer who has previously written bestselling fiction under other names. Film rights have been bought by Universal Pictures, with Ron Howard A Beautiful Mind) to direct
and Brian Grazer (The Da Vinci Code) & Michael De Luca (The Social Network) to produce. This book is out on 26 January 2016.

Over to J P Delaney to tell us more…

The Girl Before had a very odd gestation. I started it over sixteen years ago, at a time when I was writing not-very-good crime novels and casting around for a new direction. I immediately fell in love with my premise – that two women, three years apart, each get the chance to move into a strange but very beautiful minimalist house, on condition they agree to live there exactly as the architect intended – but, for one reason or another, I just couldn’t make it work. So I left it, half-finished, in my bottom drawer and went off to write a different kind of book instead.

Those books turned out to be reasonably successful, and my publisher offered me a contract that kept me busy delivering a new novel every couple of years. But in between those books, I kept coming back to The Girl Before. I tried it as a screenplay, then a TV script, then a psychological thriller again. I wrote 50,000 words – about half a book – then ditched all but two chapters. I just couldn’t see what the real story was – but I knew that, somehow, it meant a great deal to me.

And then, last year, I had a revelation. Both my lead characters are attracted to the cold, clinical perfectionism of One Folgate Street – my minimalist house – because they’re damaged in some way. One, Emma, has been burgled. The other, Jane, should, I decided, have had a stillbirth. And as I wrote that crucial scene, something extraordinary happened. I realised the connection I felt with this book was because my partner and I had also lost a child – to cot death, rather than stillbirth – many years previously. Our next child was born with a rare genetic condition similar to autism. At some deep, unanticipated level, I had been using the various drafts of this story to work through what had happened to us – the perfect life we’d once thought we were going to have; the picture-postcard family; all replaced by something quite different but no less wonderful; leaving in its place, perhaps, a deep-seated distrust of the apparently-perfect, and the people who are attracted to the idea of living a beautiful, well-ordered life because they think it will somehow fill the hole in their own hearts.

Once I’d realised that, the book wrote itself. In fact, it wasn’t even finished when it was sold at the Frankfurt Book Fair – a sample of just the first fifty pages was circulated and prompted offers from publishers in thirty-five countries. Now that publication looms, seeing it finally go off into the world is both terrifying and satisfying. But I’ve also learned a valuable lesson as an author: even when you don’t think your story is about you, it is.

FIND OUT MORE ABOUT THE GIRL BEFORE