Can a self-published author’s perky tweets lead to a book deal? How do editors and authors make a four-part series intriguing enough to keep readers waiting for the next installment? And exactly what goes into cover design for a women’s fiction series? All of these questions (and more besides!) will be answered during this three-part Behind the Scenes at a Publishing House series with Transworld Publishing editor Harriet Bourton and Ivy Lane author Cathy Bramley. Over to you, ladies. 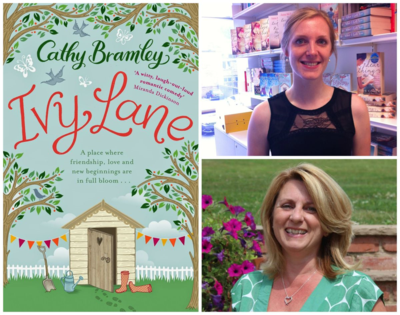 In my household, we’re addicted to box sets and TV series. It made me think that I wished I had something like it in book form, so I spent a few months thinking about how it could work and the kind of author I’d like to find to work on it with. Then one day over Christmas, a particularly perky tweeter caught my attention – a self-published author who seemed very friendly and chatty with the bloggers I knew of. I had a look at her book on Amazon and I liked the cut of her jib so I bought it, read it and thought, ‘ooh there’s something here…’ and I decided to get in touch with her.

Harriet emailed me out of the blue on the day of my post-New-Year’s-day party when I was in the middle of working out whether I had enough glasses and could I possibly squeeze any more ice cubes into the freezer. She asked whether I’d be interested in talking to her about working on a project together. She mentioned the idea of releasing a book in parts over the year and I was immediately intrigued and interested to hear more. We spoke a few days later and hit it off instantly. I had an idea for writing a book set on an allotment and felt it would work really well to roll out the story along with the seasons. Luckily, Harriet liked the idea too.

Cathy and I felt really strongly that the structure of the book was crucial to the reader’s enjoyment of the series. Having talked about what the key moments would be in the story, Cathy sent over a brilliant synopsis for all parts of the book that illustrated where the high and low moments would be and how each part would begin and end. I shared that material with the whole of the Transworld team when I took it to our acquisition meeting. It was great to have something so visual as a reference when the idea for this project was so different from anything we’d published previously. There was lots of discussion about how the serial could work, but I left the meeting with a huge smile on my face.

I don’t think I’ll ever forget the moment when Harriet called to say that Transworld were offering me a contract to write the novel. I was so honoured to have been approached by Harriet and it gave my writing a boost like no other. It made such a perfect start to the year and completely changed my writing life. I put all my other plans on hold and plunged myself immediately into writing Transworld’s first ebook series: Ivy Lane.

Join us on Monday for the next part of Behind the Scenes at a Publishing House, when Harriet and Cathy will reveal their editorial process.