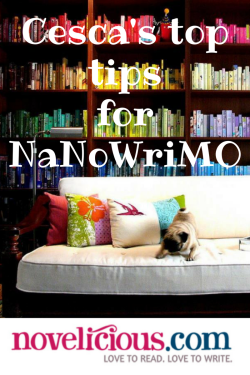 Feature by Cesca Major
Nanowrimo. I've never actually hit 50k in a month but I always join in. I think it's a fabulous excuse to write lots and quickly. A good motivating month to remember lots of others are out there too.
I'm currently around 8k in after 11 days which is pretty unimpressive but I am on holiday in the Canaries so am allowed, and now have a lot to catch up on when back. What I am doing is joining in the daily word races Book Camp are running, so at least I am getting some words on the page.
Book Camp is running word races at 10am every day on twitter. This means for 1 hour every day people write as fast as they can, as many words as they can produce, racing against each other. We stop at 11am and confess word counts. It is amazing how many words some can write in that time. Even those that don't produce over a thousand (or 2k if you're author Rachael Lucas) often comment that it forced them to finish a scene they were struggling with, or got them started for the day when they were faffing. I have always loved them. The sense that others are out there doing the same thing, the guilt if I reach for my mobile in that time (I leave wifi off for it so I can't be tempted) and the way that once you start concentrating the time really does fly. They give you a great excuse for a proper break too. Before I would feel bad about small breaks, always thinking I hadn't rally earned one, now I break knowing I can have that cup of tea and cake guilt-free. Try it sometime. Not to worry if there's no one to race – I often try to beat my own PB.
LOTS OF LUCK X X
5 top tips for getting a first draft down:
1) STOP OVER-THINKING IT – so you don't know where to start, so you don't know whether this scene will be in the final draft, so you don't know whether your heroine will have blue eyes, so you're not sure… You get the picture. Have a loose idea of what you might want to write but don't let fear stop you even beginning.
2) SET A TIMER – this is a great way of forcing you to write and write quickly. Set yourself a set amount of time and get your head down. You are not allowed to do anything else in that time (be it 15 mins, 30 mins or an hour) – even if you just sit there staring (that's thinking time) you might be surprised by how much you achieve.
3) DON'T RE-READ – stop tinkering with the small stuff. Don't go back over your work, try to forge on with a new scene. Don't correct every comma and worry about minor details you can research later. Just write more. More words. Loads of words.
4) STOP IN MIDDLE OF SCENE – this can be a really good way of starting the next day as you don't need to worry about a blank page and no ideas, you can start where you left off.
5) SET YOURSELF A DEADLINE – don't be unrealistic but maybe set yourself a deadline for that first draft to be complete. Work out roughly how many words a week that equates to (I always think a day sounds too hard as loads of people don't write everyday but in large chunks) and try to get it done.
Cesca has more tips and inspiration in this Beat the Block Video:

For more of Cesca's top tips have a look at the Beat the Block videos.