Welcome to our writing advice column where you'll find bestselling author Julie Cohen answering reader questions! Hit a roadblock or have a writing-related query? Drop them in the comments or email helen@writingtipsoasis.com and keep your eyes peeled for Julie’s response in later columns. 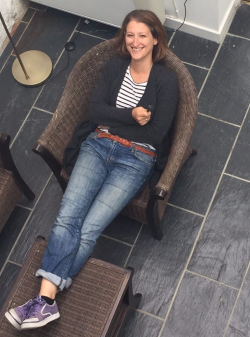 About three years ago, I started writing a novel. On the rare occasion that I find the time to write, I’ll sit down and try to pick up where I left off. Thing is, when I sit down, I always reread and often edit the entire text I have written.This probably explains why I haven’t gone past a page or two into Chapter 6.

I think I have a strong start, and I think I know where I want the end to go and what the central conflict will be, but I am not sure how to get it there. So, here’s my question: do authors plan out and outline their novels prior to writing, or do they make it up as they go along? Also, is it normal to constantly edit while writing or do authors just write it all down before they lose their train of thought, knowing they can go back later and fix mistakes?

First, jumps up and down, waving HI RYAN! (I went to high school with Ryan. Small world, isn’t it?)

I get a lot of questions asking ‘What’s it normal for authors to do?’ And if you have been reading any of these columns, you will probably know that my usual answer is: Everything is normal, and nothing is. Every writer writes differently. Some are plotters, some aren’t; some are editors, some just write it all down in a rush and fix mistakes later. And writers might plot and edit for one novel, and go with the flow and fix things later for another novel. Essentially whatever works for you right now? That’s what’s normal.

That said, in three years you haven’t got past chapter six in your novel, and this is sort of a problem. So I’d say there are some things you should probably try, to help get yourself nearer to finishing.

If you can only write sporadically, maybe it’s a good idea to plan out the novel. For one thing, a plan is much quicker and easier to look at than a whole manuscript. You can glance at it to remind yourself what you’ve already written, and what you need to write next, and then you can get to work writing, instead of spending precious writing time remembering what’s going on and then fiddling with a sentence or two of chapters one to five. Think about it as a journey: if it’s a journey you make every day, you remember where you’re going and can just set off. But if it’s a journey you only make every year or two, you are probably going to need a road map or a TomTom. The plan is your map.

What should this plan look like, and how detailed should it be? Well, that’s totally up to you. Some writers make a really vague one-page outline; some make very long scene-by-scene breakdowns. Some use Excel spreadsheets; some draw a diagram. Myself, I use Post-It notes: I write down each event in the novel on a separate note, and then arrange them in order, maybe in a notebook or maybe on a posterboard or even on the wall. One reason why I like Post-Its is that they’re flimsy and impermanent, so I feel at liberty to completely change my plan for the novel, if I think something else works better. All you do is throw away the Post-It scenes that aren’t working and replace them with new ones.

One proviso to this advice: some writers feel that planning a novel stops them from actually wanting to write it. For them, the fun is in the discovery, and having a road map makes it all too plodding and predictable. If you’re one of these writers, making a detailed plan might be counterproductive. You might want to do a little bit of micro-planning instead. For example, every time you write, at the end of your session, jot down a few things that you think might happen in the next few scenes—or even a few lines of dialogue, or a setting, or an image. This means that next time you sit down to write, you have a prompt to work from, rather than having to go back to the beginning.

In my opinion, I think it might also be a good idea for you to give up the notion of editing as you go, at least for now. This is for a couple of reasons. One is that it steals your writing time and makes it editing time. The second is that in my opinion, a writer can only really see how to edit their book when the first draft is done. By the time you type ‘THE END’, your vision for this novel may have totally evolved and changed, and you will probably have to edit the first part of your novel substantially anyway.

Anyway, what’s your more immediate goal? Finishing your novel, or having a word-perfect set of six chapters and nothing else? If you absolutely must edit because it gives you a soothing sense of control, try setting a timer and only allowing yourself say ten minutes of editing time, and then spend the rest of the session writing new stuff.

Good luck with it, Ryan! I hope you finish. There aren’t enough novels written about our home town. 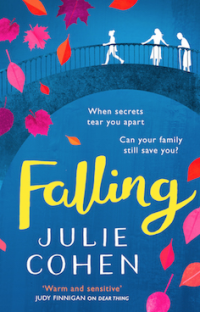 Julie Cohen has had 21 books published under her own name and pseudonyms, selling nearly a million copies and being translated into 15 languages. Several have won or been shortlisted for awards, including the Romantic Novelists' Association's Award, Best Romantic Read and the National Readers’ Choice Award. Her novel Dear Thing was a Richard and Judy Book Club pick.

Julie is also a popular speaker and teacher of creative writing, tutoring courses for Penguin Random House Academy, The Guardian, Literature Wales, The Victoria and Albert Museum, and Writers' Workshop. She runs a fiction consultancy business, with several of her clients having gone on to publication. Her latest novel is Falling.