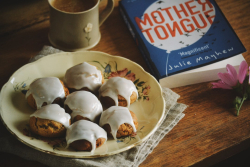 I know what Russia looks like. Or at least in two-dimensional form. All I need to do is switch on my computer and images of this vast country will fill my screen.

What I want to know, though, is what does Russia smell like? When you walk past a café what scents do you pick up? And, the biggest question for me, what does it taste like?

That’s why I adore an author who includes food in her novels. It allows you to research the recipe and have a go at making the dish. It lets you get, through taste and smell, that little bit closer to the characters.

So. What does Darya Ivanova’s Russia, from Julie Mayhew’s novel, Mother Tongue, taste like?

I think it might taste of honey and spices…

“I had only been guessing at what it took to be a mother.”

Darya Pavlovna was eleven when her sister, Nika, was born. Their Mama couldn’t cope so took to her bed. It was Darya who had fed her from the bottle, who had raised her. And she did the best she could. After all, she was still a child herself. Until, one day, on the day of Nika’s Day of Knowledge ceremony, a terrorist attack takes the person Darya loves most in the world.

Darya was now eighteen. She’d been the substitute mother of the family for seven years. The terrorists didn’t just take her sister. They took Darya’s identity, her reason for being.

And now she needs to discover who she is. 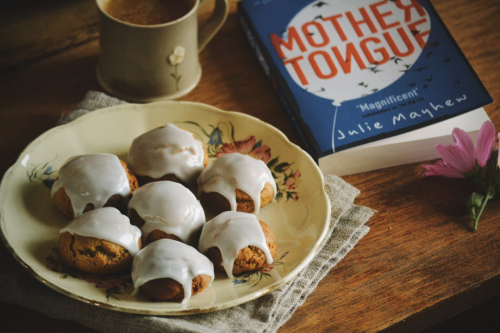 Initially Darya responds to the news of her sister with a campaign of ‘domestic terror’. Cooking up a pie, kulebyaka, made with yeast dough and filled with meat, vegetables, rice and egg. Cooking was the way Darya kept herself together. It distracted her. Beef stew, chickens in marinades, bitochki (chicken cutlets) served with cabbage all emerged from her kitchen.

And when Darya travelled, to discover just who she was, she continued to cook. After all, that was how she showed her love. Like so many of us who bake and cook.

And, when she was missing home what did she do? That’s right. She created food.

When I read about the pryaniki in Mother Tongue I knew I had to make them. Spices and honey in a cake? Oh, yes, please.

Darya’s Mama said to leave the batter overnight. So that’s what I did, too. The first batch I made I put in a large spoonful of coffee, but it turned out to be too much for our, slightly tamer, palettes. This is therefore my anglicised version of pryaniki:

FIND OUT MORE ABOUT MOTHER TONGUE

This article, recipe and video first appeared on abookishbaker.co.uk