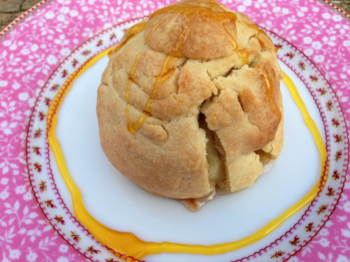 They appeared to enjoy their food in King Henry VIII's day. Sweetmeats, sugared plums, pies, pasties, fine meats and game. Oh yes. And not a ready meal in sight. There were parties and feastings that would go on for days and days with puddings sculpted out of marchpane (marzipan). And the poor would come to the door for the copious leftovers. Nothing was wasted.

In The Other Boleyn Girl by Philippa Gregory, a fictionalised version of historical events, Mary, the sister to Anne Boleyn (who, if you remember, was the second wife of Henry VIII) is the other Boleyn girl. Mary was part of the King's court. She became his mistress and had his baby, Catherine.

During the summer after having her baby, the court was going to the New Forest to hunt deer via Sussex and Winchester. Mary decided to go to Kent instead. To Hever Castle. She craved the rest.

Anne, who was already there, could not understand why Mary wanted to be in Kent with her baby rather than court with the king. But Mary has realised what life is about. She wants to make her daughter happy.

During that summer Mary got on her horse and rode around the countryside. She saw the hay meadows cut, the wheatfields harvested and the cows separated from their calves. She also lay with her daughter under the trees and ticked her palms and nibbled her toes.

And as the summer became late summer, the apples grew larger and the plums richer in the orchard with the sound of wasps filling the air. This wonderful fruit signified that the season was coming to an end. Her time with her daughter was coming to an end. It would soon be October and Mary was expected back at court in Windsor.

"The apples swelled round and rosy in the orchard. I went into the kitchen and asked the cook to make us great fat apple dumplings for our dinner."

The following recipe is, well, possibly not entirely historically correct. After all, buying pastry from the supermarket is not something they did in the 1500s. But with all the apples around at the moment, it is a great dish and so easy to make. Enjoy.