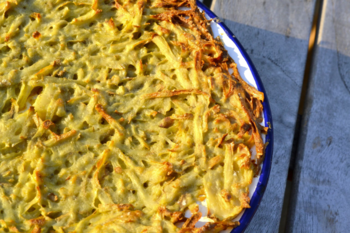 I have – if I may say so myself – given you lots of gorgeous, often chocolate themed, mainly cake-based recipes here in this column. There have been jammy buns, homemade mini rolls, lemon cakes, slices of tiramisu and lush, ripe strawberries dipped in dark chocolate amongst other delectable treats. So this week, I'm going to give you something different. Something from the Second World War. And yep, you'd be right in thinking this isn't something you'd want to make on a regular basis. During the war (is it just me that says this like Uncle Albert from Only Fools and Horses?), rationing was in full swing and everyday folks didn't have much in the way of salt, butter, flour and cheese. You know, tasty stuff. On the island of Guernsey especially, because of the German Occupation, they didn't have much at all. They didn't even have soap – certainly not enough to make a lather. (This is something I shamefully did not know until I read the brilliant Guernsey Literary and Potato Peel Pie Society by Mary Ann Shaffer and Annie Barrows.)

So a dish made from this period is, to be frank, a little odd for our modern palettes. But I strongly believe it is important that we try these things.

We have mentioned The Guernsey Literary and Potato Peel Pie Society rather a lot lately. It is one of the books we'd love to read again for the very first time and Juliet is a fictional friend we'd love to have in real life.

The Guernsey Literary and Potato Peel Pie Society opens just after the end of World War Two. In it our heroine, a writer called Juliet, has no idea what to write next until, completely out the blue, she receives a letter from the island of Guernsey. Specifically from a member of The Guernsey Literary and Potato Peel Pie Society. Juliet starts corresponding with the Society and they tell her about the history of their name and give her a taste of what it was like living in Guernsey during the German Occupation. But don't for one minute think this is a dry history lesson. It is a powerful story of the characters, including Juliet, and how reading (and their sense of community) kept them going through the most atrocious living conditions. 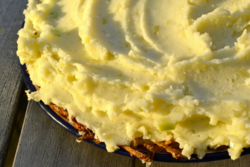 One of the characters invented this pie and, if we were being truly authentic, we would cook it with no salt, butter, flour or milk. Certainly no cheese or spring onion. But there was beetroot, to make it sweet, giving it the look, one would imagine, of a pink blancmange on a bed of potato peelings. But I am not mocking. I applaud their foodie imagination in such terrible times. The potato peel pie was concocted by Will and consisted of "mashed potatoes for the filling, boiled beetroot for sweetness, and potato peelings for the crust."

The picture at the top shows the potato peel crust. I actually added the white bit of potato and not just the peelings. Then I have added pictures of the various stages it went through. I know. Not as mouthwatering as, say, a homemade chocolate hobnob.

This is how I made it. 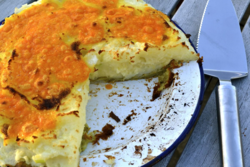 One pie plate greased, one grater.

For the pie crust

About 6-7 potatoes, peeled and chopped into chunks

Flavours e.g spring onions, cheese or chives. You could also, if you're brave, add beetroot.

So, what do you think? Is this how you imagined it if you've read the book? Would you make it?