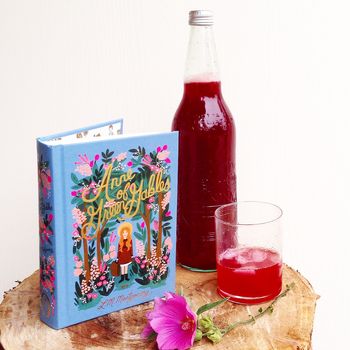 Yes, it's no wonder Anne's friend, Diane, likes the drink so much. She is actually lugging down glass after glass of homemade currant wine. Whoops.

Anne of Green Gables cannot help but get herself into scrapes. Whether it be serving her friend alcohol instead of cordial and unintentionally getting her drunk, rigging up her Sunday hat with buttercups or confessing to being responsible for Marilla's lost amethyst brooch, it is no wonder she once commented: "Isn't it nice to think that tomorrow is a new day with no mistakes in it yet?"

Anne grew up without her mother and father and was passed around from pillar to post including an orphanage until she settled, accidentally, with brother and sister Marilla and Matthew Cuthbert of Green Gables. Anne, with her bright red hair, has a wonderful view on everything surrounding her. She observes beauty in everything and, if on those occasions she does struggle to find the beauty, she imagines it instead.

She chatters constantly but people cannot help warming to her. She is oddly and uniquely wonderful.

I'm rather embarrassed to say that I came to Anne of Green Gables as an adult rather than a child. But it is one of those wonderful novels that can be enjoyed by any age group.

To make the raspberry cordial: