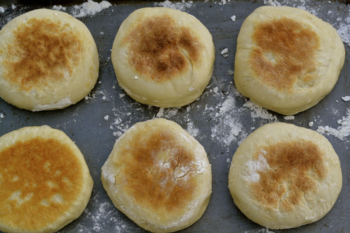 I adore the places described in an Agatha Christie novel. Whether it is on the English Riviera down in Devon or a wonderful manor house in some remote location, I just want to be there with the cast of characters. Though not the one that gets the chop, obviously, but sometimes I feel that is a chance I'm willing to take. I think it has something to do with the time period, too. And hanging around with the upper classes. Everything feels so glamorous.

When Miss Marple visits Bertram's Hotel in London, well, I'm rather envious. Even in Miss Marple's time the hotel had old fashioned charm. Refinement, elegance, impeccable service and comfortable chairs in which to consume one's tea and muffins. Yep, I'd fit right in there. Not. Anyway, one can daydream.

It is in this hotel where the best muffins in the country are served. I'm not talking about American muffins, massive things, served in paper cases, studded with fruit. I'm talking about proper muffins. English muffins. The type of muffin served lightly toasted with lashings of butter.

If you mention a muffin today everyone presumes you mean the aforementioned cake type. Bread muffins have been pushed to the back burner. This is nothing new – the rise of the American muffin was about even in Christie's time. Lady Selina, a guest at Bertram's Hotel, talks about the difference between American and English muffins: "Do you know when I went to America last year they had something called muffins on the breakfast menu. Not real muffins at all."

Don't get me wrong, I enjoy muffins, especially homemade ones, but there is something rather simple and lovely about an English muffin. They are as cosy as an Agatha Christie novel feels. I always rather miss the novels when I close them up. And I rather miss a muffin when it is all consumed. 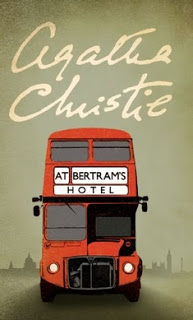