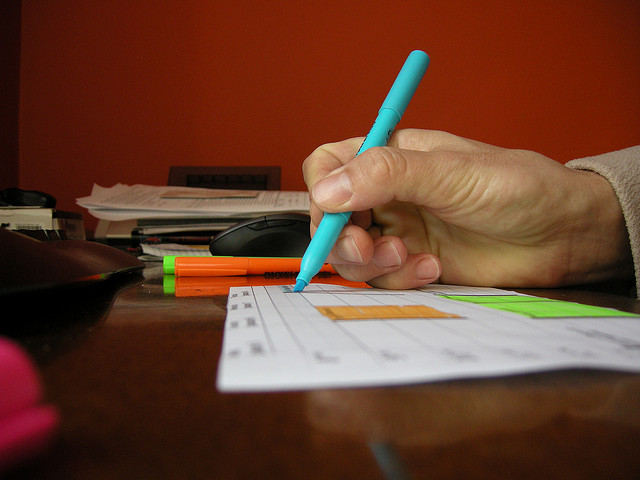 Structuring your novel visually is a process that will help you write your novel. You might like to write as you go along, but sometimes that doesn’t work – and you will find yourself lost in the story, where, no matter which way you go, you simply cannot get to where you wanted to go. Visually structuring the key plot points and other important aspects of your novel can help you create the story with a strong, gripping plot.

Create a plot graph in which you draw a straight line between the beginning and the end. Above and below, add key plot points, events, and special secondary characters. After that, connect them. The result will be a jagged line, but you will end up with the chronological order of events in your novel, which will aid you whenever you get lost in the whims of your characters.

A novel usually has one protagonist and one antagonist. Create a table in which you will develop your protagonist’s background, the changes they go through as the novel progresses and which events have the necessary psychological impact on their character and personality. Additionally, you might try to show a new side of them through an important event near the end of the novel – drawing a parallel between the old and the new. Make the same type of table about the antagonist – a good antagonist is always as well developed as the protagonist, and unless he is a psychopath, he has to have a background that makes his “meanness” believable.

Decide on important, game-changing scenes in your novel that will have a great impact, both on your characters and the plot overall. Write them down on index cards (this doesn’t necessarily have to mean you have to use paper – there are programs like Scrivener which are designed to help you with that) and break them down into cause and effect sequences. These scenes can be the same scenes you wrote in your plot graph. Breaking them down will not only make the process of writing them easier, it will also help you make them more intense and dramatic. And dramatic scenes always stay with the reader long after they’ve read the words.

Sometimes, your secondary characters might cause confusion, not only in the readers, but in yourself as well. Make a list of them, and then next to them describe their appearance, followed by their personality traits, their quirks and opinions. In the final column, explain the characters’ role in the novel, why they appear, and why are they important in the story. This way, you’ve stopped yourself from creating too many characters – as this will help you use one character for more than one role, and it will also keep the reader engaged. The more times a secondary character appears, the more endearing he becomes to the reader, so when the character appears again as a solution to a problem for example, the reader is satisfied.

You can have parallel plot lines in your novel, true, but most novels have a single plotline represented through many subplots in a novel. It is very easy to start miniscule, tiny plotlines that will grow into major ones. It is also very deceptively easy to create subplots that will never fruit into anything major and become forgotten. That is why you should highlight your plotlines, using a different color for each one, and when they merge – use the resulting color to highlight the new, merged plotline. As you go along through your novel, you will end with either one or two colors (depending on how many plots you have) and if you have more – it means you have a loose end you have to tie up.

Image credit: SuperFantastic on flickr and reproduced under Creative Commons 2.0[author] [author_image timthumb=’on’]https://writingtipsoasis.com/wp-content/uploads/2014/12/photo.jpg[/author_image] [author_info]Georgina Roy wants to live in a world filled with magic.
As an art student, she’s moonlighting as a writer and is content to fill notebooks and sketchbooks with magical creatures and amazing new worlds. When she is not at school, or scribbling away in a notebook, you can usually find her curled up, reading a good urban fantasy novel, or writing on her laptop, trying to create her own.
[/author_info] [/author]