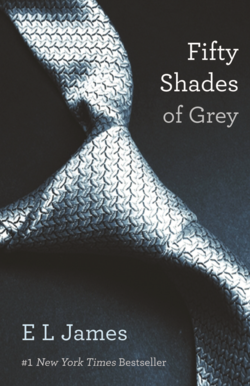 ‘Creative differences’ between author and director, casting changes, rating challenges, debate over the content – Fifty Shades of Grey has had it all!

But does the film – based on EL James's novel – live up to its notoriety and actually offer anything worthwhile to cinematic audiences (beyond a few awkward giggles)?

Here’s what people had to say on the adaptation in the latest #BookVsFilmClub.

People were quick to *ahem* praise the film, with @tyates01 tweeting: 'The film isn't a total disaster, but it's probably still one of the most worrying films I've seen in a while.' @AndrewDEvans added: 'To be fair, all my major criticisms are really of the 'novel'.'

@thommoj03 was full of compliments too, tweeting that it was 'not the complete car crash I expected'. He added: 'Wasn't bowled over but still found positives. It looked stunning'. Though the colour scheme seemed to irk @EmzFinn who asked: 'Was it necessary to have his entire house/wardrobe/office dressed in shades of grey? Too much?'

It wasn't all cynicism, however. Fan of the novel, @DonnaGriffo, was delighted with the adaptation, tweeting: 'Very true to the book…great chemistry between Dakota and Jamie'.

Other fans of the book will recall Ana's tendency to bite her lip. Well, in the film she also has a thing for resting the end of a pencil seductively on her lip while she ponders life's great dilemmas. All I could think was that it would surely be more seductive if the pencil didn't have a rubber (that's an eraser to you non-Brits, don't get any ideas!) on the end. Ew! @bookprincess87 was not impressed with the pencil shenanigans either, tweeting: 'The thing with the pencil was so put on as well, didn't look at all natural'.

Of course, one of the most un-natural elements of the story for many is the cringe-tastic dialogue. @EmzFinn tweeted: 'Shame about the super cringey lines in the first half though. Second half came into its own a lot more'.

Overall, the general consensus seemed to be that director Sam Taylor-Johnson had done the very best she could within the parameters of what she'd been given. As @EmzFinn tweeted: 'You can definitely tell the effort Sam TJ put in to making it a bit more substance over style (sex)'.

#FiftyShadesOfGrey really is a film of two halves. The first half is funny (intentionally and unintentionally) and cringe. #bookvsfilmclub

‏Personally, I left the cinema with the lingering thought of just what might have become of this film had EL James not been given so much control – and how much better it could have been if Sam Taylor-Johnson had been given free reign.

And I'm normally one championing for author's influence.

Have you seen the film adaptation? Read the book? What do you make of it? As ever, let us know in the comments or join the debate using #bookvsfilmclub.