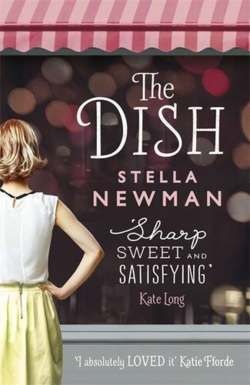 By food lovers I mean, of course, me.

In my opinion, there is nothing better than a novel about food, maybe with a touch of romance and a well-drawn female character. I'm attracted to these types of novels like a bee around a honey pot.

I've read two of the novels on this list, and adored them both. The food element really added an extra something, giving the novel a real mouthwatering appeal. The other three are now firmly on my to-be-read list.

1. The Dish by Stella Newman – Laura and Adam meet over a custard doughnut. (You had me at custard.) Laura finds the last one has been sold to Adam and attempts to get it off him. But her attention soon focuses on Adam instead of the doughnut. And she sees he is attractive and intelligent, so they start spending time together. The problem is, Laura's job as a restaurant critic has to be kept a secret from him, because of Adam's job. Can love flourish under these circumstances? Out in paperback this week.

2. The Art of Baking Blind by Sarah Vaughan – It is 1966 and Kathleen Eaden, a cookery writer and wife of a supermarket owner, publishes The Art of Baking. It is a recipe book with instructions on how to nurture a family through cakes, biscuits and pastry. Now, in the present, five amateur bakers come together to become the new Mrs Eaden. This book is full of delicious cakes. Paperback is out in August.

3. The Confectioner's Tale by Laura Madeleine – In Paris 1909, at the famous Patisserie Clermont, a chance encounter with the owner’s daughter has given one young man a glimpse into a life he never knew existed: of sweet cream and melted chocolate, golden caramel and powdered sugar, of pastry light as air. A forbidden love affair begins. Eighty years later an academic finds a photograph with the words 'forgive me'. Intrigued she begins a quest to understand the mystery behind it.

4. Bread Alone by Judith R. Hendricks – Wynter Morrison is a 31-year-old 'trophy' wife. Then her husband shocks her by announcing their marriage is over. She moves to Seattle and immerses herself in the bakeries; drinking coffee and smelling the perfume of real bread. Eventually she accepts a job at a bakery, hoping the ritual of baking breadbwill ease the pain and help her move on.

5. That Part Was True by Deborah McKinlay – This wonderfully gentle and charming novel has food in abundance. In fact, the food is a central character next to Eve Petworth, an English, divorced home cook with a grown up daughter, and Jackson Cooper, a divorced American, who is a writer and also a home cook. The two are brought together through food and the written word.

What are some of your favourite foodie novels?