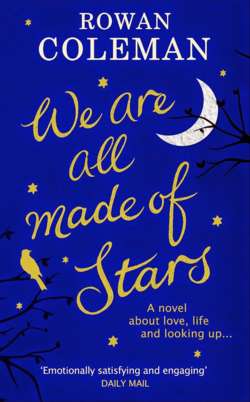 There is something rather special about a cloudless night where the stars are shining brightly. Inky black sky with beacons of light shining out. Stars have that romance about them. Something magical and special. Its little wonder they're used in book titles…

1. We Are All Made of Stars by Rowan Coleman – Do not miss me, because I will always be with you … I am the air, the moon, the stars. For we are all made of stars, my beloved … Wherever you look, I will be there. Stella works at night as a nurse in a hospice in order to keep away from her husband. She's married to a soldier. A soldier who is mentally and physically ill, after his stint in Afghanistan. So Stella writes letters on behalf of her patients for their loved ones, which she promises to post after their deaths.

2. Beneath the Moon and the Stars by Holly Martin (writing as Amelia Thorne) – Despite living in some of the most beautiful places in the world, Joy has never felt like any of them are her 'home'. She decides to move to an idyllic village in a cottage near to her childhood home, only for the villagers to be very unwelcoming – disappointingly so. And for some reason, when Hollywood star, Finn, sees her initially, he walks in the other direction. But as the unfriendliness continues, it is the unlikely Finn who comes to her rescue.

3. The Brightest Star in the Sky by Marian Keyes – A varied collection of people live at 66 Star Street. Music executive, Katie, lives on the top floor. Then cabbie, Lydia, streetwise and sharp-tongued. Fionn is a gardener on the first floor; he is very handsome and likes to keep to himself. But then he's thrust into the limelight with a TV programme. Matt and Maeve like there, too, trying to fight off despair with random acts of kindness. But a mysterious visitor is in their midst and is about to change everything …

4. The Night of Rain and Stars by Maeve Binchy – The late, great Maeve Binchy's novel set in Greece. Fiona, Thomas, Elsa and David are forced to face their own individual life crises, which prompted the move to Greece – after witnessing a tragedy.

5. Written in the Stars by Ali Harris – What if? What if your life had taken a different path? What if you had carried on seeing that person, or taken that other job, or moved to a completely different country? Would this alternative life have given you that happy ending? Bea Bishop is about to find out. Slipping and falling unconscious whilst walking down the aisle on her wedding day, her life splits into two journeys. One where she continues walking down the aisle to her intended, and the other where she flees the church. Which journey will give her that happy ever after?

Can you think of any books we've missed?