Part library and part portal to countless other worlds, is there anything as magical as a bookshop? If you’re like us, you can’t pass a bookseller without ducking in for a whiff and a rummage. Nor can you leave with your arms free of purchases and your wallet intact. As lucky as we are to have a wide range of beautiful bookshops in the world, there will always be an elusive fictional few we can only dream of visiting. Here are five we wish actually existed. 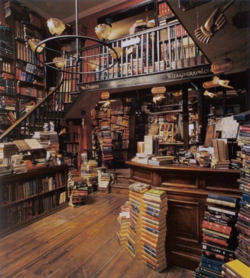 1. Flourish and Blotts from the Harry Potter series by J.K. Rowling

Wedged between the likes of the Leaky Cauldron, Ollivanders and Gringotts Bank on Diagon Alley, Flourish and Blotts is where all Hogwarts students go to purchase textbooks for the school year. With “shelves stacked to the ceiling with books as large as paving stones bound in leather; books the size of postage stamps in covers of silk; books full of peculiar symbols and a few books with nothing in them at all”, it certainly beats shopping for school books at WHSmith.

2. Shop Around the Corner from You’ve Got Mail

A New York neighbourhood bookstore becomes embroiled in a war with the new chain bookshop on the block in this charming romantic comedy directed by Nora Ephron. Overflowing with childhood classics and children’s book paraphernalia, The Shop Around the Corner was all wood panelling, fresh flowers and twinkly lights and, as much as we love watching the romance unfold between Meg Ryan and Tom Hanks, we watch this film over and over again just to get a glimpse of the shop itself.

Clay Jannon, an unemployed web designer, takes a job working the graveyard shift at a 24-hour bookstore, owned by the strange Mr. Penumbra. The shop is frequented by urgent and very intense customers who borrow from a mysterious set of books, which Clay has been warned not to read. When Clay eventually gives in to his curiosity, he discovers the books are written in strange code. Concerned about the now missing Mr. Penumbra, Clay embarks upon an adventurous quest to Unbroken Spine, headquarters of a secret society.

4. The Good Novel from A Novel Bookstore by Laurence Cosse

Former comic-book seller Ivan "Van" Georg and stylish Francesca Aldo-Valbelli team to establish the Good Novel, a Parisian bookshop that will stock only masterpieces in fiction, which are selected by a secret committee of writers. At first, the warm welcome of the bookstore results in soaring sales, but there is trouble brewing in the literary community …

“If you happen to pass by 84 Charing Cross Road, kiss it for me? I owe it so much.” 84, Charing Cross Road is a 1970 book by Helene Hanff, later made into film starring Anne Bancroft and Anthony Hopkins, about the 20-year correspondence between her and Frank Doel, chief buyer of Marks & Co, an antiquarian booksellers located at the eponymous address in London. While this book isn’t exactly fiction, it has made the list because the bookshop no longer exists (it was knocked through and converted for restaurant usage). Reading the letters, which fly across the Atlantic Ocean between the pair, is an absolute joy, and we always long to walk through the doors of 84 Charing Cross Road to see Frank sitting in his office, surrounded by his leather-bound first editions and antiquities. The film adaptation is lovely, too.

How about you? What fictional bookshop would you visit if you could?