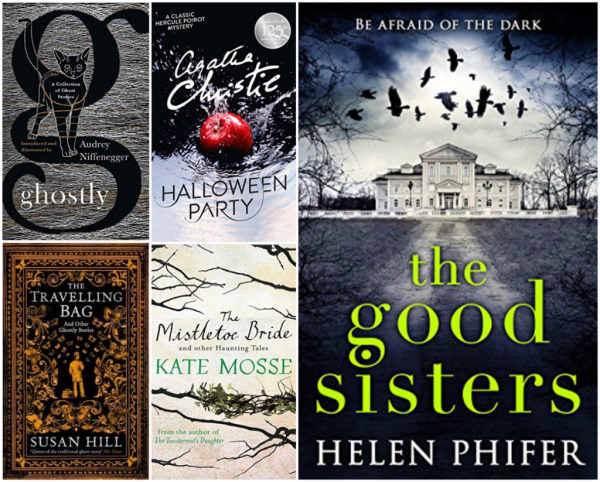 If you don't fancy stepping out into the cold for trick and treating tonight why not light a fire and snuggle down with a ghost story or two? Or maybe you'd prefer a traditional whodunit based around a Halloween party? Just, don't turn out the lights…

1. The Good Sisters by Helen Phifer – It's 1931 and Mother Superior Agnes has offered safety to a young woman who is running in fear of her life. In the morning she discovers one of the Sisters, in a room locked from the inside, has suffered a terrible fate. Evil has entered the convent. Some eighty years later, Kate Parker buys the run down convent and has dreams of renovating it to transform it into a bed and breakfast. Then strange noises appear at night. Crucifixes start appearing on the walls. And Kate no longer feels like she's alone in the house.

2. Ghostly: A Collection of Ghost Stories by Audrey Niffenegger – the author of The Time Traveler's Wife has pulled together some of her favourite creepiest, weirdest and wittiest ghost stories. The collection includes stories by Edgar Allan Poe, M. R. James, Neil Gaiman, Kelly Link and Audrey Niffenegger herself.

3. Halloween Party by Agatha Christie – a teenager is found dead in a tub of bobbing apples. Joyce had been boasting at the Halloween party that she'd once witnessed a murder. Then she, too, was found murdered. Is Hercule Poirot looking for a murderer, or a double-murderer?

5. The Mistletoe Bride & Other Haunting Tales by Kate Mosse – a collection of short stories written by Kate Mosse. This is her first collection. Although some have been published elsewhere before there are eight brand new traditional ghost stories.

What books will you be reading this Halloween?