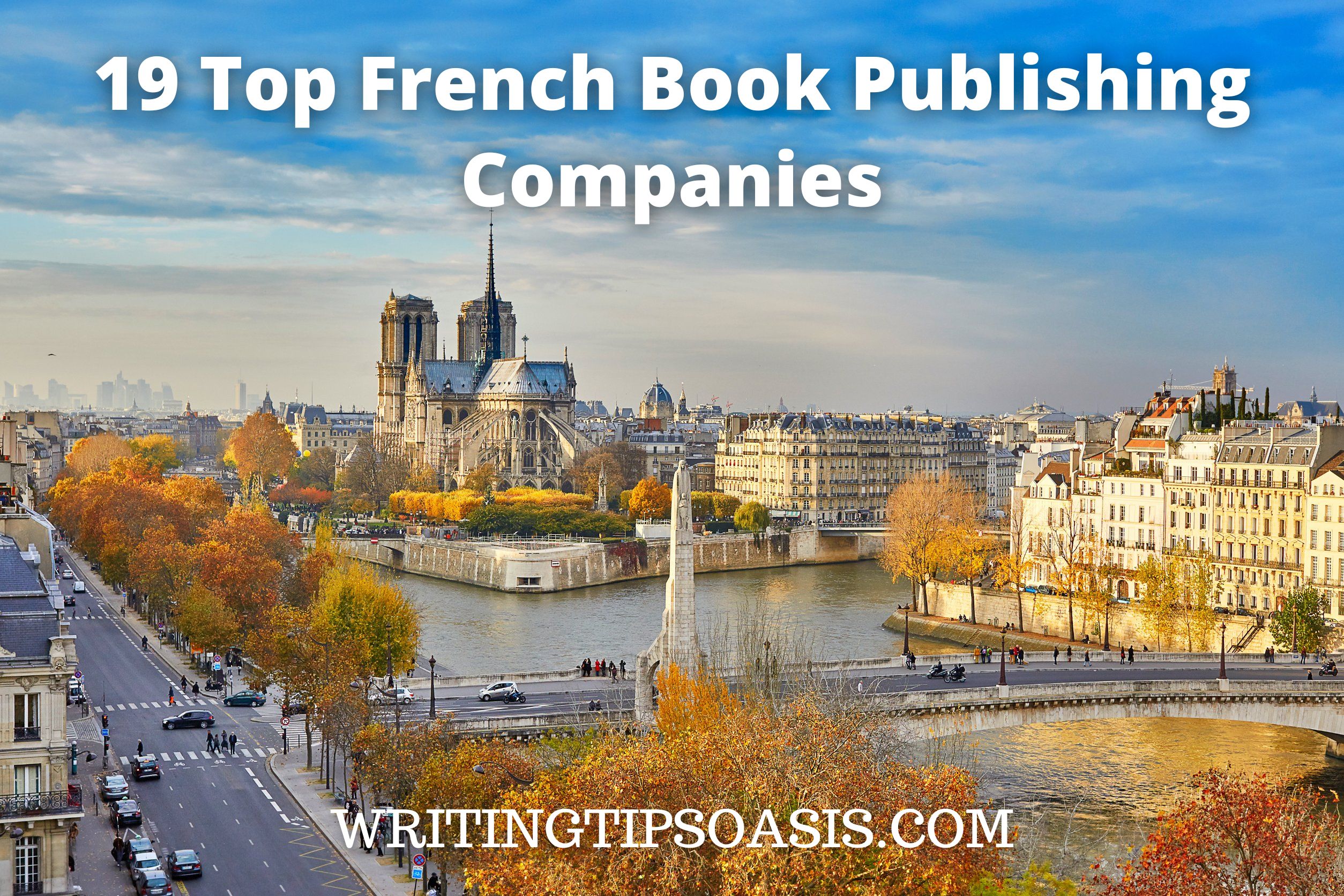 If you’re an author who has written a book in French for readers in France and need a publisher, this post will help. Below we’ve featured 19 top French book publishing companies.

Eight decades ago, Tatian and Georges Rageot established their publishing company. They hoped that young readers would understand and appreciate the lives of kids in other parts of the world through literature. Now, the Paris-based Rageot boasts hundreds of titles in children’s literature.

Beginning readers can enjoy illustrated books that will help them develop a habit of reading. Moreover, middle-grade readers will love Rageot’s novels, which include mystery, thrillers, fantasy, and historical fiction. In particular, upcoming titles like Véronique Petit’s Le mot d’Abel and Sophie Rigal-Goulard’s Dix jours sans écrans are sure to make waves.

Rageot is open to submissions of children’s literature. Whether you send them by mail or email, they’ll review your writing project within three months.

Located in the Montrouge commune to the south of Paris, Bayard Éditions is another top-tier publisher of children’s literature in France. For over three decades, it has diligently worked with writers and artists to craft stories that thrill, inspire, and educate kids.

The Bayard Éditions catalog is built for children between two and 14 years old and contains both fiction and nonfiction. Marine Gerald’s La pelote de soucis is perfect for early readers because it teaches them about their feelings while Victoria Ying’s La cité des secrets is an adventure-filled graphic novel that also highlights the importance of friendship.

If you think that your work fits alongside other Bayard Éditions titles, you can send your full manuscript by mail. The publisher is looking for children’s rhyming books, activity books, and novels in pretty much all genres. 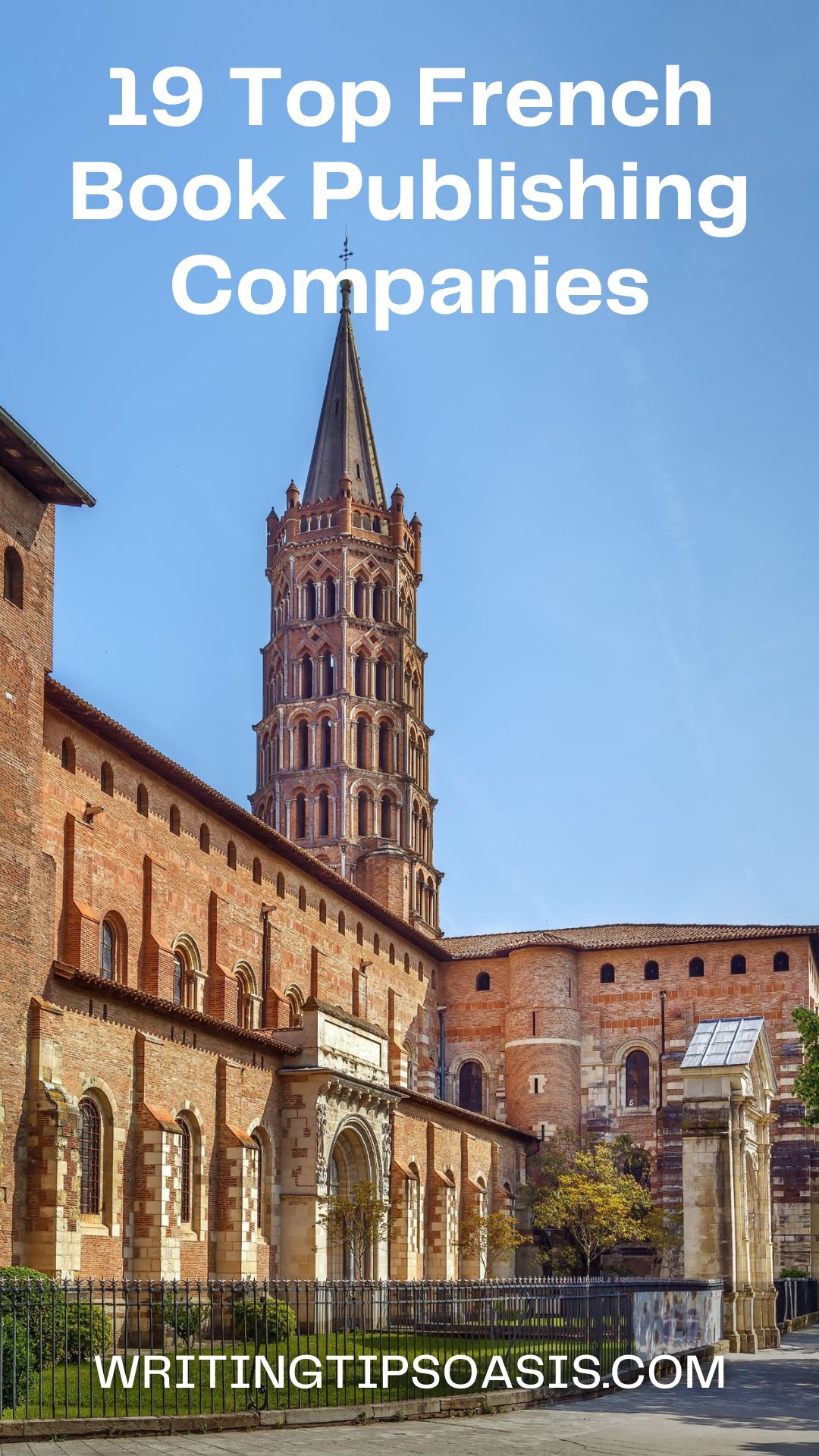 It’s been almost two decades since the inception of Nouveau Monde Éditions — a standout publisher of exceptional fiction and nonfiction. The company comfortably resides in the heart of Paris, yet its stories go beyond France and celebrate humanity’s rich past and complex present with no topic left unturned.

Nouveau Monde Éditions has built a commendable assemblage of books that tackle the history of both the ancient and contemporary kinds. There are essay collections, graphic novels, biographies, and titles like Fabien Tillon’s Culture Manga that focus on pop culture and media.

Writers yearning to send their manuscript to Nouveau Monde Éditions can do so by mail. The contact page contains the different email addresses you can message depending on the genre of your project.

Éditions JC Lattès emerged in 1968. Over the years, its high-quality titles that dive into contemporary life have won accolades like the Nobel Prize and Prix Interallié. Consequently, the Paris-based publisher also handled the works of best-selling novelists like EL James, John Grisham, and Dan Brown in France.

Isabel Finkenstaedt is the mind behind Kaléidoscope, the children’s book publisher in Paris that’s been around for more than 30 years. For her, it was important for kids to learn early on that literature serves different purposes such as escapism, self-discovery, inspiration, and education.

Since the publisher serves kids between 0 and 6 years old, the catalog is divided into topics like family, Christmas, humor, color, Halloween, art, and even pirates. Likewise, David McKee’s Les amis d’Elmer is about friendship while Hans Wilhelm’s Tyranno le terrible is a fun and heartwarming dinosaur story.

At present, Kaléidoscope accepts submissions of children’s books and will review manuscripts within four months.

Authors of French literature should send hard copies of their manuscripts. On the other hand, you can send proposals for poetry, human sciences, and health books & cookbooks online.

Stéphane Watelet established this Paris-based general publisher 18 years ago. Editions Télémaque covers a wide variety of topics despite adding only 10 new titles each year. Plus, the company significantly grew its catalog of science books after landing a deal with Science & Vie in the late 2000s.

Editions Télémaque is a splendid source of nonfiction books about biographies, humor, music, and sexuality. Henri Pigaillem’s L’Histoire à la Casserole is perfect for foodies while Lucie Lartigue’s Une injection pour revivre is a science book that any reader can enjoy. Moreover, it also has historical novels, thrillers, and graphic novels.

Although the review period is slightly longer than usual (half a year), you should still consider sending a manuscript online.

Father Marie-Vincent Bernadot launched Editions du Cerf 93 years ago after an appeal from Pope Pius XI. Today, it’s not only the biggest publisher of Christian books in Paris but also in France and anywhere with sizable French communities.

Editions du Cerf is more than welcome to receive and evaluate your manuscript, which you can send by mail.

Situated in Paris and established in 1990, Éditions Zulma is a humble yet widely praised publisher. Thanks to independent book shops, it has carved a loyal niche and gathered literary minds in and out of France, which is why it’s also the home of highly proficient translators.

Éditions Zulma concentrates resources on quality literature regardless of the original language. Here, you can read classic and contemporary short stories, essay collections, novels, and compelling nonfiction. For example, Gerd Brantenberg’s Les Filles d’Égalie is a classic dystopian novel from Norway that only had its French version released last year.

Since the beginning of the year, Éditions Zulma has stopped asking for hard copies. Authors of foreign or French literature should submit digital copies, which the team will evaluate within three months.

Twenty-two years ago, Éditions Tanibis began operations in Villeurbanne, Lyon. Unlike other publishers, it’s a non-profit organization, which explains its limited releases and book type. Each year, it only prints up to five new titles.

If you’re working on a graphic novel or something similar that fits the Éditions Tanibis catalog, you can send a manuscript online.

Headquartered in Paris, Éditions Syros was founded in 1984 to challenge the limits and norms of what children in France could (and should) read. Rather than just entertain, children’s literature should be a gateway for critical thinking, cultural sensitivity, and unbridled creativity.

Today, Éditions Syros is the prime choice of learning institutions for children’s books. From early readers to middle-grade kids and teens, kids of all ages can browse fiction in genres such as mystery, adventure, romance, and humor. There are nonfiction titles like Alexandre Messager’s Les mots indispensables pour parler du racisme as well that help young people become more socially conscious.

As the name implies, Au Diable Vauvert is located in Vauvert, one of the Nimes arrondissements in the south of France. The publisher began at the start of the millennium, striving to champion undiscovered voices in the French literary scene while ensuring the lasting influence of veteran authors.

Amusingly, Au Diable Vauvert has a foothold in nonfiction about bullfighting, horse riding, and horses in general. For example, Chris Irwin’s Les chevaux ne mentent jamais beautifully explores the relationship between humans and horses. Likewise, it also has erotica, graphic novels, poetry, and YA literature.

Éditions Payot & Rivages is a Paris-based publisher divided into two titular brands. They clearly have different priorities and preferences in literature, but there are a few similarities. In particular, Payot & Rivage both cater to avid readers of philosophy and essays.

One of the distinct book categories in Payot is health and lifestyle, which has Jacques-Alain Lachant’s La marche qui soigne. It also publishes books about social science, arts, psychology, and parents & children. Meanwhile, Rivages has the French edition of Alison Lurie’s folklore fiction Le zoo céleste along with titles in music, film, and sci-fi & fantasy, among others.

The publisher accepts online and hard copy manuscript submissions. Visit the specific links for Payot and Rivages for more information.

Originally, Le Dilettante was just a specialist bookstore with a lot of secondhand titles for customers to read onsite. It stayed the same until the end of 1984 when it officially became a publisher. Since then, Le Dilettante operates in Place de l’Odéon, Paris, and releases 12 new titles annually.

Le Dilettante welcomes proposals and manuscripts of French and general literature. You can submit your project by mail.

Located in Paris, Mango Éditions serves people of different lifestyles and interests. Essentially, the goal is to support readers with practical and relevant information. To achieve this, the company ensures that its authors and artists are genuine experts or highly familiar with the subject matter they’re tackling in their book.

Interested writers can mail their manuscripts to Mango Éditions. Unlike other publishers, its evaluation period is relatively short at only two months.

Based in Paris, Éditions Le Pommier is one of the most important and scholarly publishers in France. This is largely thanks to its unbreakable commitment to Michael Serres’s Le Contrat naturel. Thus, most of the titles in the catalog focus on the relationship between nature and humanity.

Alongside titles in fiction and children’s literature, it has a wide selection of books about philosophy, life science, and Earth science. Marc Lachièze-Rey’s Les Avatars du vide, for one, dives into astrophysics and quantum mechanics.

If you want to submit a manuscript to Éditions Le Pommier, just complete the form on the contact page.

Apart from gastronomy and nature books, there are titles about gardening, art, and history. For fiction, readers can pick from children’s books, horror, thrillers, and sci-fi & fantasy novels. Guillaume Guéraud’s La brigade de l’oeil is a dystopian story that recently came out.

Éditions du Rouergue is interested in fiction, children’s books, and illustrated books. There are different people to contact for each book category, so check the manuscript submission page.

André Cailleau launched this legendary French publisher more than 300 years ago — and it wasn’t even called Editions Stock back then. The company from Rue du Montparnasse, Paris, only got the name when Pierre-Victor Stock took over in 1877.

This veteran publisher is seeking projects in French fiction (except sci-fi), international fiction, essays, and general nonfiction. You can conveniently email your manuscript to Editions Stock.

More than 40 years ago, Pierre Michaut founded a specialist bookshop for lovers of film, sci-fi, and crime novels. In 1982, Editions L’Atalante published its first book Les Mémoires de Groucho Marx and has since been one of the go-to indie companies for writers in France and even other countries.

Unfortunately, Editions L’Atalante isn’t open to new submissions this year because it’s still reviewing past manuscripts from 2021. On the bright side, the publisher will resume accepting manuscripts throughout January 2023.