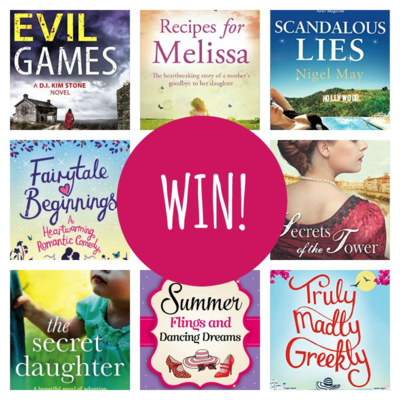 Happy Friday, book nerds! We hope you have lots of lovely weekend plans and plenty of books to fill those not-so-planned moments, too. In today’s giveaway, we have a whopping great bundle of books from our friends at Bookouture up for grabs.

One lucky winner will receive a package containing paperback copies of Recipes for Melissa by Teresa Driscoll, The Secret Daughter by Kelly Rimmer, Fairytale Beginnings by Holly Martin, Secrets of the Tower by Debbie Rix, Truly Madly Greekly by Mandy Baggot and Scandalous Lies by Nigel May. Also included, signed copies of Evil Games by Angela Marsons and Summer Flings and Dancing Dreams by the lovely Sue Watson.

That lot should keep you going for at least a few days, right?

To enter to win, simply leave a comment telling us which book you’d start with. A winner will be picked at random after the closing date on Friday 7 August and contacted at the email address used to enter. UK and Ireland only.