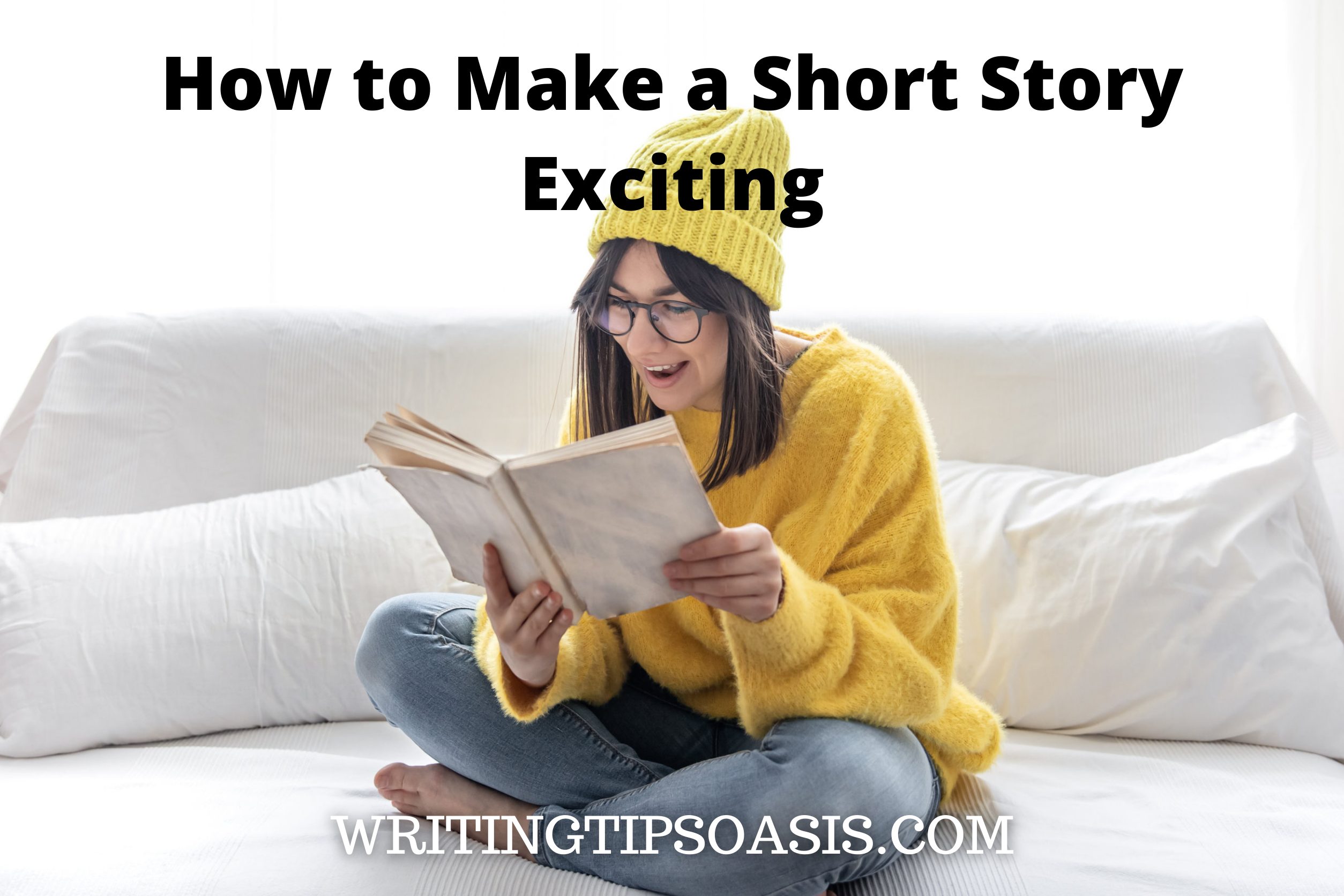 When it comes to writing short stories, there are two things you need to remember:

1) A short story is a good exercise for you as a writer;

2) Short stories are more memorable the more exciting they are.

How to make a short story exciting is what we will be focusing today at Writing Tips Oasis. But, before we get to that part, it’s worth mentioning what your short story needs to have because most of the tips we will be mentioning are meant to be used in the editing process of the story, rather than the writing phase.

As such, let’s take a look at some basics about writing short stories:

So, let’s take a look at what you can do with a short story during the editing process and how you can make it more interesting.

1) Have fun and experiment

As we already mentioned, a short story is primarily a good way to exercise your writing muscles, because in a short story, you need to write a cohesive, whole story, which will have the three major elements of a story: a beginning, a middle, and an ending. You can experiment in many different ways, even while you are writing it: by mixing genres, portraying the extreme representations of the themes you have chosen, and creating characters that are vastly different from characters that you would be using in a novel.

For example, let’s take one aspect of the protagonist of a novel: relatability. In a novel, you want to make the protagonist flawed, but likeable enough to be relatable, because you want the readers to spend time with that character for 400 pages and more. In a short story, however, it is not exactly a requirement to be able to connect with the protagonist. In fact, the more deplorable a short story’s protagonist is, the more attention-grabbing the short story can be. Case in point is the short story “Survivor Type” by Stephen King, published in the collection Skeleton Crew, 1982. The protagonist is in no way likeable or relatable, and the readers are given a nearly voyeuristic chance to watch this deplorable man sink even further into his own deplorability as the story progresses, and it is exactly that aspect of the story that makes it unforgettable. And, of course, the self-cannibalism. 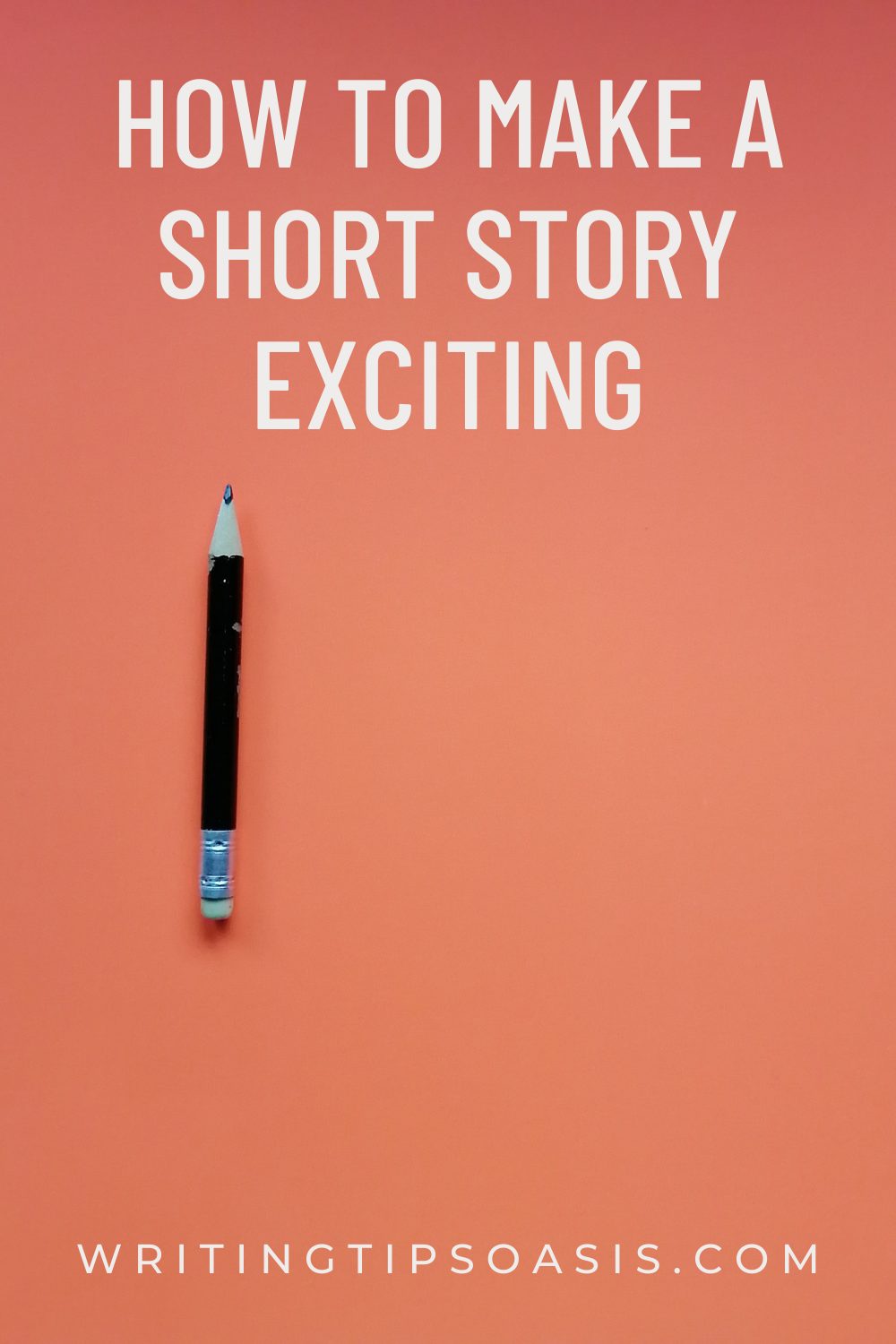 Here, it’s not just about using better words to describe a sort of action. It goes without saying that even in short stories, showing instead of telling is a cardinal rule that should be followed. When it comes to tweaking the writing style, we refer to changing also the form of the story to increase the level of impact it will have on the reader, like for example, changing the narrative into a diary form, or telling the story in the form of newspaper cuttings.

The writing style, or the prose, in the story should be analysed from a principle called “lightness,” which refers to an easy way of telling a story, in the sense that in a story, you need to use as fewer words as possible. A short story is not a place for long paragraphs, detailed descriptions, and deep dives into the psychology of the characters (unless of course, diving into the psychology of the characters is exactly what your intention is, and in that case, you should determine if writing a novel would be a better idea because it will give you more time to do it properly).

In a short story, every word should have meaning and it should be irreplaceable, meaning, there is no better word that could replace it, there is no shorter phrase that can say the same thing.

From the perspective of the protagonist and the point of view in which you are writing the story, you need to remember that:

– an omnipresent narrator can use any type of language style to present the story;

As such, if you are writing in first person, or third person limited, where essentially the protagonist is telling the story, you need to keep the writing style consistent in terms of the words being used in the descriptions, as a doctor would describe a situation differently than a dancer, for example. The doctor would focus on how healthy a new person they’ve met looks, and describe them from his own point of view as a doctor, while the dancer would pick up on the grace of the new person’s movements and would describe them from the perspective of a dancer. An architect would describe a building differently than a lawyer.

Ensuring that the writing style matches the narrator adds to the unicity of the story, and it is those quirks that make a story memorable.

3) Create a twist or a double twist

The reason why we emphasized the importance of knowing your theme and what you are trying to say is because sometimes, the intention to make a short story more interesting with more twists and turns can cause you to lose sight of the original idea. But, if you try to add a twist, or create a double twist in a story with your original idea in mind, the resulting story can be quite memorable and exciting to read.

As we said, plots in short stories are simple, and often, even when the story does have a twist, it’s one that is easy to predict. That is why adding another twist can actually make the story better and more memorable.

Here is an example of a predictable twist: a man is proposing to his girlfriend after barely six months of dating, and she is immediately surprised and not willing to agree. As the story progresses, the man explains all the reasons why he wanted to marry her, but her unwillingness and their whole relationship convinces him that they are not actually a good match, and decides to end the relationship. Meanwhile, his explanation does convince her that she wants to marry him, so by the end of the story, their positions are reversed, and she is the one ready to say yes to marriage, but it is too late.

Now, let’s take a look at an example of a double twist: let’s take a story where the protagonist is visiting with his mother and sharing his life plans, only for it to turn out that he is talking, in fact, with a therapist, whose task is to determine his ability to stand trial. The double twist is when it turns out the man was adopted, and the therapist who was determining his ability to stand trial is actually his real mother who had given him up for adoption 30 years ago.

4) Create an ambiguous ending or detail

Many short stories have ambiguous endings where it is not clear where exactly the protagonist has ended up by the end of the story. Here, as an example, I will mention the story titled “Swaddling clothes” by Yukio Mishima.

In the story, the protagonist witnesses an unexpected birth of a bastard, and out of spite, the doctor has wrapped him in newspapers rather than proper swaddling clothes. And although the protagonist has wrapped the baby in proper linen afterwards; she feels guilt and shame and cannot let go of what it would mean for the man that baby would grow up in to know that he had been swaddled in bloody newspapers. On a whim, the next day she decides to walk through a park, where she comes across a sleeping homeless person wrapped up in newspapers. For her, the twenty years had passed, the baby grew up into a man, and when the homeless man grabs her wrist, she does not resist. What happens afterwards is left to the imagination – was the homeless man kind and let her go, or if he kills her in a rage over his own life situation is unclear. And the reason why it works is because the point of the story is not the homeless man and what he does, but of the protagonist’s reaction and mental state. And the reason why the story is memorable is because the ending is left to the imagination.

Not every story can handle an ambiguous ending. If you want to create an ambiguous ending, then the “point”, or the main beat of the story needs to be completed. In the story above, the focus of the story is on the protagonist herself, and as during the story, her journey is internal and focused on the future, by the end, she has her own dark thoughts proven right, and it does not matter what the homeless man actually does to her.

Even when you are writing a short story, you will have to create the world, the situation, the characters, and based on the point of the story, you will have to share as minimal information as possible within the story. The story is simply the tip of the iceberg that the readers will get to experience, and they will be shown only the aspects of the protagonist that are enough to enable the readers understand the story, where the protagonist came from, and where the protagonist is by the end of the story. Less is more, as they say.

But within that “less is more” you need to reveal the amount of information, or the type of information that will stir the readers’ imagination. The readers should feel like they have gotten a glimpse of a larger story at hand, a world where many stories like that are possible, even if the genre is drama and not fantasy (or set into a fantastical world where the imagination can run loose).

Let’s take the first story by Stephen King as an example. In the story, it is revealed exactly how the protagonist got to the island, and how he became so deplorable, and the ending is quite final. That particular story by Stephen King stirs the imagination because at the beginning of the story, there is a question as to how much shock trauma can a patient handle, which makes the readers wonder what they would do in such a situation, and whether they would survive or give into the self-cannibalism as the protagonist did.

Meanwhile, “Swaddling Clothes” is a simple story about the psychology of a woman (the protagonist), but through her, we get to glimpse a lot of elements of the society she lives in, from the woman who birthed the baby, to the homeless man she encounters by the end of the story. It stirs the imagination, asking you to wonder what happens with the homeless man, what happens to the woman (the protagonist), and what happened with the woman who gave birth, and why was her birth so sudden and surprising, and many other questions that one could get about the other characters.

In the end, making a story more exciting can be done in a myriad of ways, and whether you do that through a minimalistic writing style, the shock value of the characters or the situation they are in, a twist or a double twist, an ambiguous ending, or an experimentation in genre – or all of them together, is up to you. The important thing to ensure is that after reading your story, your readers will continue to think about it for years to come.