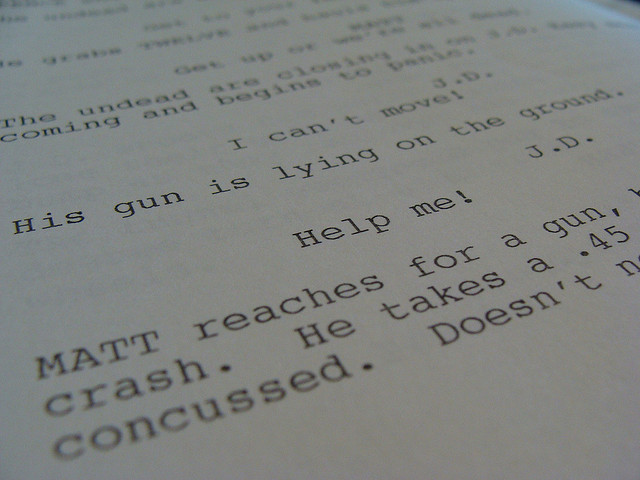 A screenplay is the detailed plan or blueprint for a film. Screenplays can be original stories, adaptations of plays, adaptations of published novels, or based on true stories. The screenplay is not just a story though, and it must contain all the necessary information for the director, actors, designers and other members of the team to create the film. While every screenplay needs a good story, a good story by itself doesn’t necessarily make a good screenplay. Writing an effective screenplay is an entirely different matter from writing a novel, and requires careful attention to detail, format and structure. Read on for the basics on how to write a screenplay.

Screenplays are very different from novels in that they must strictly adhere to the formatting rules of the film industry. These rules cover various aspects such as font, margins, indents, type of paper, number of lines per paragraph, and even how the script needs to be delivered to a director. There are several screenplay formatting software such as Final Draft, Movie Magic Screenwriter, Movie Outline and Montage. These aids can make your life easier so that you can concentrate on the story. But you still should be aware of the rules, so that you can check that your work is in acceptable format. Even a great screenplay can get rejected if you don’t follow these rules. So, do spend time on learning about the script format before you start.

Write a great story but keep it simple and short

All films need a great story, but remember the time constraints. The beginning, middle and end of the story must all be wrapped up nicely within 90 minutes of screen time. This doesn’t allow for complicated stories, or too many plot twists and turns. Screenplays are usually between 90- 120 pages long, and written in Courier 12 point font, with a lot of white space between sections. The strict formatting rules have a purpose- the idea is that one page of the script formatted in this manner will correspond to about one minute of screen time. Make sure all the necessary components of your story can be conveyed within these constraints.

Most screenplays are based on a formula that can be adapted to any type of story. The formula requires the story to have a key event or a trigger, then a struggle, a crisis, the climax and the final resolution, in that order. The story must be clearly planned out so that all of these elements are addressed. Following that, the characters should be fleshed out, and then finally, the dialogue must be added in. The dialogue is very important but unlike in novels, it needs to be very brief with a lot of back and forth between the actors. Most screenwriters listen to real people around them so that they can write dialogue that sounds natural.

Beautiful verse and flowing prose are entirely lost in the world of screenplays. Your writing needs to be as concise and to the point as possible. Even terse and choppy at times. Generally, you need to keep everything to a couple of lines at most- actions, descriptions, characters, and dialogues. Remember, you are drawing the blueprint for a visual medium. Every part of the story must be shown, rather than told. This means, no lengthy descriptions, monologues, or character development. Everything should unfold in the film, and the screenplay has to provide the clear details for how the story will unfold.

Image credit: Victor Gregory on flickr and reproduced under Creative Commons 2.0[author] [author_image timthumb=’on’]https://writingtipsoasis.com/wp-content/uploads/2014/03/Pranay.jpg[/author_image] [author_info]Pranay Kanagat is a freelance writer who has a love for writing on various subjects. In particular, he enjoys creative writing. He is also studying for an Engineering degree.[/author_info] [/author]