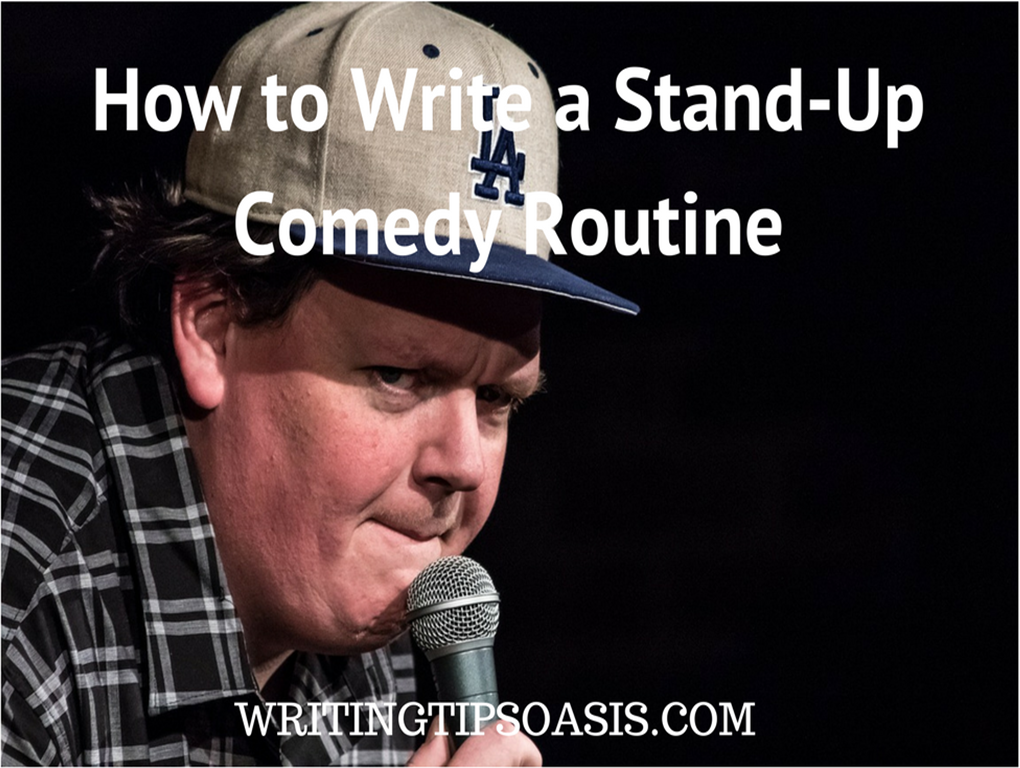 Writing and performing stand-up comedy is an incredibly rewarding creative process. To see the material that you have written gain an immediate reaction from a live audience is an amazing feeling.

What is stand-up comedy? Stand-up is a style of comedy where the comedian performs in front of a live audience, reciting jokes, monologues, one-liners… whatever comes into their head basically. Venues can vary from bars and coffee houses to theatre and stadiums.

From the outside, watching comedians perform, it can look so effortless. Witnessing the likes of Louis CK, Sarah Silverman or Jimmy Carr perform, it may appear that they are simply saying what pops into their head – but you can rest assured that an immense amount of crafting and refining goes into every line they utter.

The following guide will mainly focus on how to write a stand-up comedy routine with the view to performing it.

Whether you want to pursue comedy as a hobby or a potential career, it all starts with the writing process.

When it comes to writing stand-up material, it can be difficult to know where to begin.

It’s different for everybody – you may have occasional flashes of genius based on things you’ve thought about or seen; you could be able to sit down with a blank page and write about a specific subject, making drafts of jokes and anecdotes and riffing and expanding on them – there’s no “correct” way.

It’s a funny thing, inspiration – it could hit you anywhere: on the bus, in the middle of the night or while you’re sitting on the toilet.

One thing that is for certain, if an idea crosses your mind, it is integral that you write it down. It doesn’t matter where – it could be on a scrap piece of paper or the drafts folder on your phone, but get it down. The mind is an amazing thing, but you can’t leave these things till a later time or you will forget; when inspiration strikes, make the most of it, because it doesn’t happen that easily all the time.

It might just be the stem of an idea or the punchline of the joke, but that’s alright, you can work backwards. Having the idea or the conclusion to a joke is a significant chunk of the battle – you can work the rest out once you have this.

Wording and timing are perhaps the areas of comedy where you must be most precise. Finding the right words to get your joke across is what sets you aside from the crowd. A very minor alteration – a slight pause before the punchline or the way you tell the joke – can turn a good piece of material into a great piece. This is the kind of thing you might find out ON stage, but it’s worth keeping in mind.

In terms of the actual writing of the material, just do whatever works for you. There’s no set way of writing material. One accessible way of doing it is writing out what the entire joke. On paper, it may not appear as funny, but when read aloud this will/may change.

An aspect that may worry you before you begin performing stand-up is the memory aspect – remembering your material.

While this could be a genuine concern (you may find it difficult to memorise things generally), it can be different when it comes to stand-up. In many cases, your routines don’t have to be word-for-word what you have prepared (as long as you get across what you want to say and arrive at your punchline), so hopefully this alleviates some worry.

Another aspect that you may not think of before you begin writing is your attachment to your material. You will feel an attachment to the material you have written, and this itself can act as a memory tool.

Once you’ve written a bit, assign it a keyword (if the routine is about breakfast foods, give it the keyword “breakfast” for example).

When you’re remembering your routine, the keyword can act as a trigger to help you launch into a piece of material on-stage. There’s nothing wrong with writing these keywords on your hand or a piece of paper so that you have something to reference while performing.

Repeat this process until you’ve at least somewhat memorised a coherent routine. 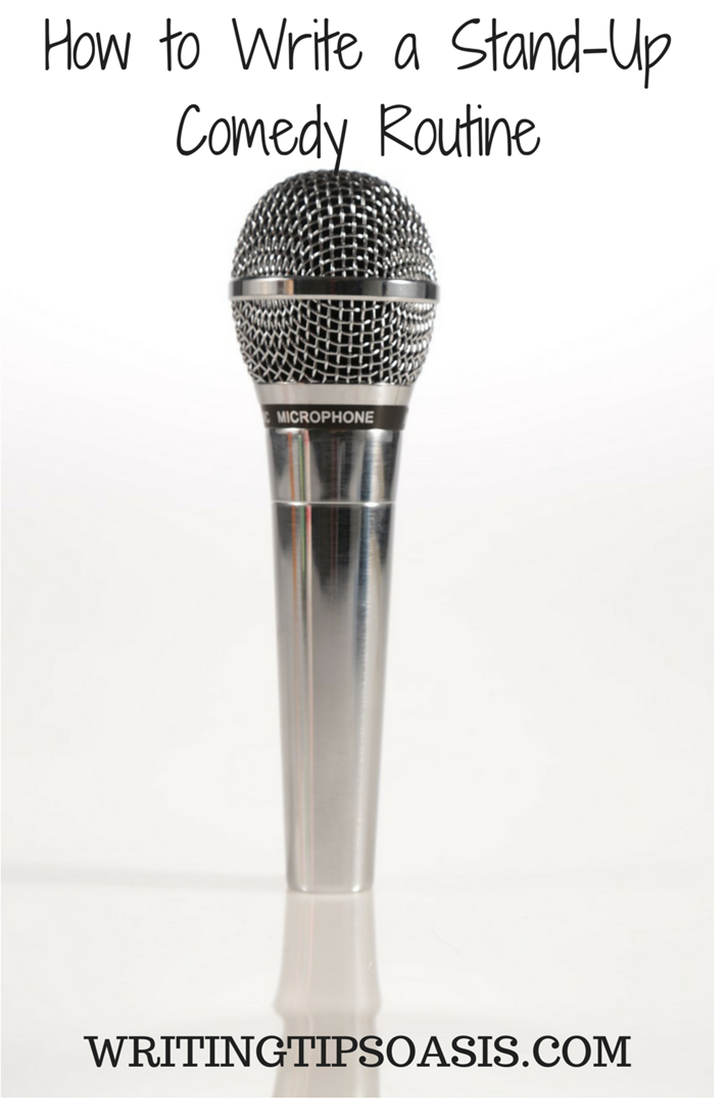 If this is your first-time performing stand-up comedy, you’re more than likely not going to be performing for longer than 5/10 minutes.

In ways, this takes the pressure off – if things are going badly, at least it’s not for THAT long. 5 minutes can go by very quickly. You’re going to have to make your material both hilarious and concise.

It can be hard to cut down your material, because it’s not hard to become attached to it. It’s something that you’ve written, and it may be hard to cut-down, but it will sound better when edited, believe me.

You’ll also have to allow some time for laughter (hopefully) and potentially improvisation, but this is more advanced – it may best to keep this to a minimum till you gain more confidence on-stage.

One of the first rules of comedy is to start with your second strongest piece of material, and finish on your strongest. This way, you’re beginning with a bit that should get a laugh and both get the crowd on your side and give you confidence, and ending on a bit that should leave a lasting parting impression.

Finding your “voice” is an important part of being a stand-up comedian. You by no means need to have this set-in stone as you begin, but you should probably have an idea yourself.

What kind of comedian are you? Are you anecdotal; observational; improvisational; a one-liner specialist; musical; poetic; absurdist; slapstick; or something totally different? Is your material: edgy; silly; political; family-friendly; or doesn’t conform to any set path?

You don’t need to know for certain but you should have a ballpark idea. It could all change after your first gig, but you should play to your strengths and not try to portray somebody that you are not. If you’re not edgy, don’t try to be offensive, as this is very difficult to get right, and if it goes wrong, can be received very poorly.

One piece of advice that I believe everyone should have starting off, regardless of style is not to overindulge yourself. Speaking about yourself is totally fine, but it’s good practice to expand what you talk about to a broader range of subjects. An audience will tire of hearing about someone that they do not know for the length of the routine.

A way of side-stepping over-indulgence while also talking about yourself and building your character as a comedian is to relate incidents that happen in the world back to you, or vice versa. This can be more inclusive if pulled off correctly.

If you’re finding it difficult to find something to write about, don’t worry, that’s natural. Clear your head, and go for a walk or a drive. Catch up on the latest news and what’s happening in the world, and before long, you’ll be formulating ideas for material.

It can also be good for some people to surround themselves with comedy. If you’re looking to perform stand-up, you’re more than likely interested in comedy, so go see a show. Look for local comedy gigs or open-mics, and go along. If there’s a big show or a festival, that could be worth attending also.

See how comedians perform and interact with the audience, and that could also fuel your inspiration and help you find a voice. Analyse the comedy – it’s often said that comedians don’t laugh; one of the reasons for this is because they are identifying the technical side of what’s being said, and how it’s being said.

You can apply this technical approach to processing comedy to any set. It’s an adage among comedians that there’s nothing less funny than talking about why something is funny. Listen to one of your favourite routines back, and try to work out how the idea was formulated.

Then apply this thinking to your own material – how can you make it as funny and as good as it can possibly be.

(Note: Hopefully this should go without saying, but never, EVER plagiarise another comedian’s material. It’s their work and under no circumstances can you imitate it and pass it off as your own.)

You should practice your material out loud, perhaps in front of a mirror or recording yourself. Just because something reads well, it doesn’t necessarily mean that it will sound natural when spoken aloud. Take note of parts of your material that don’t sound right – you’ll need some rhythm to the way you perform, don’t let unnecessary words and sentences put you off.

It’s also worth running your jokes by an impartial friend. Their tastes may differ from yours, so if you’re wondering if something is genuinely funny or not, it may not hurt to get a second opinion – although if you think it’s funny, you should be onto something.

A lot of the comedy writing process is reworking and streamlining, so don’t stray away from it. It may not be the most fun aspect of writing material, but it is one of the most essential.

Earlier in the article, I mentioned surrounding yourself with comedy and attending gigs. Perhaps one of the venues for these trips will be the place of your own gig? Keep an eye out for places that are looking for performers or contact a venue or promotor and enquire about doing a comedy set.

Wherever you decide upon, have an idea of your crowd. For example, if it’s during the day and there’s a crowd that is slightly older or younger than what you’re expecting to play too, perhaps don’t use your more overtly risqué material. And if it’s an edgier late-night crowd, perhaps don’t use as much light material (obviously, that’s your call to make, though).

Things are hopefully starting to come together if you’ve done everything written above. To reflect, so far you’ve:

– Got inspiration for your material

– Written some jokes and routines

– Watched or attended some comedy shows to get the juices flowing

– Have an idea of your comedic voice

– Refined your material in front of mirror/recording

– Chosen what order your material works best in

– Made up and learned off a 5/10-minute routine

… well then, there’s only one thing left to do – perform.

Regardless of how this goes, be it amazing or downright awful, don’t let it define how “good” you are at stand-up. It takes time and practice to hone any craft, and comedy is no different.

No one begins as the finished article. Take feedback from your first gigs, what people reacted too, what they didn’t. If it works, keep it, if it doesn’t, either bin it or keep working on it.

Sometimes it’s a matter of finding out how to put the puzzle together – which piece of material compliments the next best – and sometimes the only way to find this out is by getting on stage.

You may already have got the stand-up bug, or you may get it after performing. If not, but you love comedy, stick with it for another while anyway. Find out what works best for you.

Have you written a stand-up comedy routine before? Have any tips you would like to share about either writing, or performing stand-up comedy? Please tell us more in the comments box below!