Have you ever been so inspired by an author’s work that you wish you could tell them exactly how much they have impacted your life? In this series, Literary Love Letters, we will be doing just that – sharing open love letters to inspiring authors. Today, The Hourglass Factory author Lucy Ribchester writes to Agatha Christie. 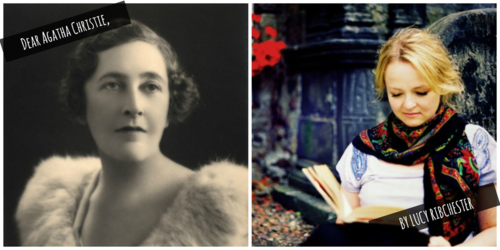 There was once a time when you scared me even more than snakes. I was six or seven and was watching the BBC version of The Moving Finger with my family. You know how it culminates, with the man putting the girl’s head in the oven? Well I thought he was going to bake her. This, at the time, was probably my biggest fear (you won’t be surprised to know that Hansel & Gretel and Sweeney Todd didn’t go down too well either).

I remember my mum comforting me by telling me it was only a TV show, and that I should think about what job I might want to do if I was working on a TV show: playing one of the characters, putting the make-up on the actors, directing them where to go. I doubt she expected me to decide I’d like to be the one making up the stories about the people being murdered.

When I was a teenager, I approached your books with the trepidation and thrill of peeking at something you know has frightened you. I read The Body in the Library first, because that was one of the scariest – imagine, having a fingernail ripped off. Shortly after that I became addicted, and by the time I went to university had devoured all of your Miss Marples. (I was a reluctant convert to Poirot but needs must, and now I like him almost as much – especially his egg-shaped head.)

I think what drew me in then and keeps me coming back to your books every year – fortunately you wrote 66 and I’ve still only read 30 – is how much you place the reader at the head of your writing table. There is no ego in your writing. Although your plots are ingenious and your settings glorious, you do this subtly and simply without stuffing in phrases or metaphors that call attention to your craft. You manage to create characters as outlandishly marvellous as Dolly Bantry or the terrifying peppermint-scented Mrs O’Rourke in N or M? without making a meal of the style in which they are written. Everything serves the story. No pudding is over-egged. There is a spareness to your work that makes the reader queen and the author disappear.

But most of all, you, more than any other writer I know of, have brought true glamour to women in their later years. Miss Marple, to the teenage me, was not a cliché of old aged women: not a cosy old lady, nor a faded belle in sequins with a sharp tongue. She was an inspiration. Her wisdom and knowledge of the world made growing older something to truly look forward to.

When I was at university I bought a hat in a charity shop because I thought it was the sort of thing she would wear. I remember sporting it to a party in London and a boy coming up to me. ‘You look like Miss Marple in that hat,’ he sneered. I grinned with glee.