Have you ever been so inspired by an author’s work that you wish you could tell them exactly how much they have impacted your life? In this series, Literary Love Letters, we will be doing just that – sharing open love letters to inspiring authors. Today, When We Were Sisters author Beth Miller writes to Judy Blume. 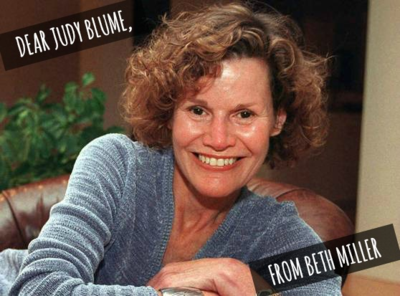 I’m hardly unusual in loving your books. There are loads of us, of all ages – mostly women, I’m guessing – whose pre-teen lives were greatly improved by the dog-eared copy of Are You There God, It’s Me Margaret, which was passed from hand to hand. This book told us that it was OK to have boobs and periods (or not have them), and what’s more, OK to speak up about our opinions. Those same women, and a not inconsiderable number of men, might also fondly remember a well-thumbed copy of Forever doing the rounds a few years later. Never before had we read such an honest, yet upbeat, account of that first shag. Spoiler: no diseases, no unwanted pregnancies, just complicated and v-e-r-y interesting feelings.

Now I’m an author myself, I realise that us all sharing the one book deprived you of some well-deserved royalties. I’m making up for it now by buying them again for my daughter. I’m especially looking forward to reading her Then Again, Maybe I Won’t, which gives an insight into the mysterious mind of boys. My kids and I already love quoting your Fudge stories to each other (‘take me with you, Pee-tah!’).

But my Desert Island Judy Blume is Wifey, your first book for adults. I re-read it every couple of years. It resonates with me like very few other novels, despite the fact that Sandy Pressman and I have nothing in common, other than we’re both Jewish. She’s a bored 1970s Jackie Kennedy-lookalike housewife in New Jersey, and I’m emphatically not. But there’s something about the humanity of the writing that lets the reader go deep into Sandy’s head, so we’re right there when husband Norman treats her dismissively, right there when she’s so turned on by her old boyfriend she thinks she might disgrace herself … and my god, the sex scenes are just astonishing – a dazzling mix of honest, hilarious, and extremely hot. Wifey manages a very neat trick – it’s a funny book which tackles the serious heart of the matter: how do you work out the kind of grown-up you want to be?

When I was trying to get published, I bigged up my writing as a ‘cross between Judy Blume and Marian Keyes.’ I should only be so blessed.

There’s so much more to say: how you’re super-cool on Twitter, how Amanda Palmer’s written a song about you, how your long career spent writing what you want is an absolute inspiration. But in summary, I just want to say thank you. God mightn’t be there for us Margarets, Judy, but you are.