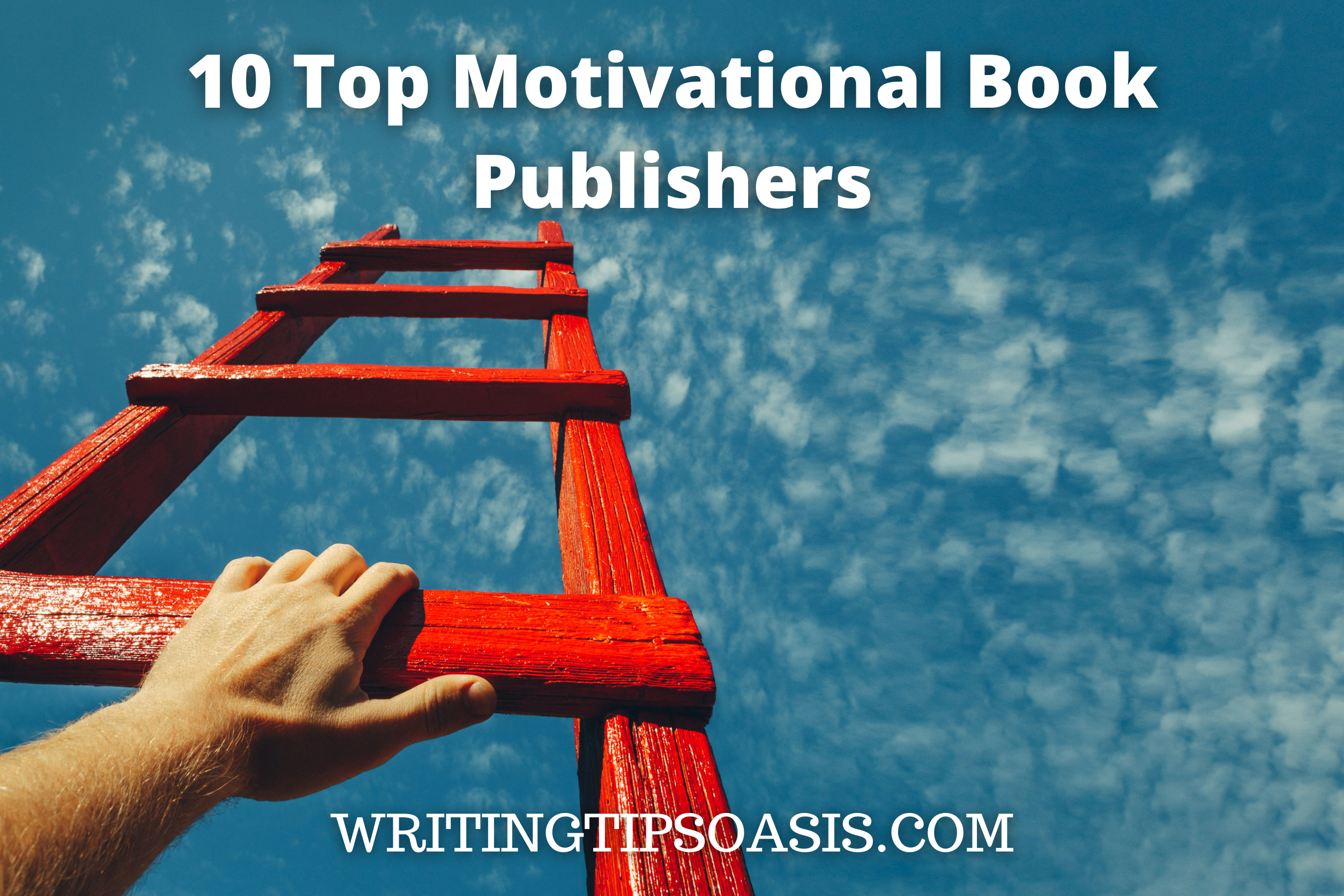 If you’re looking for a list of motivational book publishers, we’ve compiled the following selection for your review.

Amber-Allen Publishing was established to create written material that would be an encouragement to those that read it. Founder Janet Mills set up the publishing house in 1990 near San Francisco, in California.

As a smaller publishing house, Amber-Allen Publishing focuses on its central mission, which is to create more material that promotes positivity in the world, including books about beauty and inspirational wisdom. They are responsible for books like “Child of the Dawn” by Gautama Chopra, “The Twelve Stages of Healing” by Donald M. Epstein, and “Dreams, ‘Evolution’ and Value Fulfillment” by Jane Roberts.

With the number of authors that Amber-Allen Publishing currently is engaged with, they are unfortunately currently not taking on new manuscripts or submissions from writers.

Founded in Austin, Texas, Langmarc Publishing is a product of the Qualben family’s foray into publishing. The family of owners has since then has continued to be representatives of quality motivational, Christian written material. They have been in the publishing industry for over twenty-five years as a traditional publisher of books and, in 2010, expanded into creating ebooks.

Langmarc Publishing produces both fiction and non-fiction, including books on abuse, communication, family, relationships, and retirement. Take a look at some of the titles that they have produced, including “Finding Peace Amid the Chaos” by Tanya Brown, “Like Abigail” by Millie Barger, and “Whispering Stones” by Sally Hawthorne.

To learn more about their submission requirements, keep an eye out on their website. At the current time, Langmarc Publishing is not considering new manuscripts.

Situated in Colorado, in the United States, Billyfish Books is an independent, non-fiction book publisher. Founder Tammie Stevens aimed to create a publishing body that would challenge industry norms and create published material based on true stories of real people that will inspire and encourage readers.

Billyfish Books is actively looking for new stories that align with its vision to be a publisher of motivational, non-fiction material. They ask authors to email a completed proposal to them. Please note that they have specifically requested that writers do not attach their manuscripts, in order to streamline the submission process.

Founded in Acadian House Publishing was created back in 1979 in Louisiana, in the United States. It operated as a publisher that was dedicated to books related to local affairs, including food and culture; while it has since expanded its publishing guidelines, they continue to be proud of their heritage.

The publishing house continues to be based in Lafayette, Louisiana to this day. They produce motivational books, books about history, sports, and spirituality, among others. Samples of their previously published works include “God First: Setting Life’s Priorities” by Bryan G. Sibley, “Growing with Eli” by Chad Judice, and “The Forgotten Hero of My Lai” by Trent Angers.

For writers interested in being published through Arcadian House Publishing, the submission process is well articulated on their website. They ask for a query letter to be sent to them, including details such as a book summary and details on yourself as an author. Be sure to check out their website for additional information pertaining to submissions.

A prominent American publisher of Christian and inspirational books, Kharis Publishing is based in Chicago, Illinois, in the United States. Founded in 2015 at Jon Brown University, they are committed to creating reading material that is edifying to readers and also aligning with their own beliefs and principles as a Christian organization.

As a smaller, independent publisher, Kharis Publishing represents an opportunity for writers who might struggle to get the attention of larger publishing houses. Most of their published books are non-fiction, including memoirs, books for teenagers and children, and books on health and wellness. They have published titles such as “Coming Clean” by W. Kent Levis, “Marriage” by Keith J. Pelletier, and “After All I’ve Been Through” by Hali Ann Swatzell.

Interested writers should take advantage of the fact that Kharis Publishing is accepting proactive manuscript proposals from writers. They are particularly interested in material that is motivational or faith-based in nature. Kharis Publishing is proud to be an active supporter of novice writers, as well as women and visible minorities.

One of the largest book publishers in the world, there are few writers who will not have heard of Simon & Schuster. Founders Richard L. Simon and M. Lincoln Schuster likely could not have imagined what a massive publishing empire they were starting when they created the company back in 1924. Today, their headquarters are in New York, with multiple branches and imprints worldwide.

The publishing giant publishes fiction and non-fiction books in multiple genres, from biographies, novels, and books for children to books on health, wellness, and motivational material for readers of all backgrounds. A few motivational titles that have come out from Simon & Schuster include “Make Sh*t Happen” by Alex Martin, “My Teacher is My Hero” by Susan Reynolds, and “The Power of a Positive Woman” by Karol Ladd.

For writers interested in being traditionally published, Simon & Schuster, unfortunately, does not accept proposals directly from writers. They encourage authors to enlist the service of a literary agent, who can then provide advice on a course of action.

With its main office situated in New York, HarperCollins Publishers is one of the largest groups in the business. Brothers James and John Harper established the company back in 1817. The company continues to be a standard-setting organization in the industry, promoting great texts and their authors.

The range of books that HarperCollins Publishers publish is extensive, ranging from biographies and memoirs, books on history, business, and self-improvement, to faith-based books and inspirational material. “Girl, Stop Apologizing” by Rachel Hollis, “13 Things Mentally Strong People Don’t Do” by Amy Morin, and “How to Do the Work” by Nicole LePera are a few titles that exemplify the style of motivational book that they’re looking for.

HarperCollins Publishers does not actively accept book submissions directly from writers. Their proposal review process requires authors to go through a literary agent or publisher.

Hachette Book Group is an American publisher with a significant presence in the publishing community. In addition to their New York headquarters, they are also represented in multiple locations across the country, including Boston and California. The company is currently led by CEO Michael Pietsch, who has over forty years of experience in publishing.

Despite their position ahead of many other competitors, they continue to look for ways to innovate and reinvent themselves. This includes publishing not only print books but also ebooks, books for young readers, and expanding from more genres that they are known for, like mystery and romance novels, to non-fiction books on spirituality and motivation. “Eat Like A Human” by Bill Schindler, “Empty Out The Negative” by Joel Osteen, and “Lovely” by Jenn Johnson, are a number of titles they’ve produced.

As is the industry standard for many larger publishers, Hachette Book Group does not accept query letters and submissions from authors themselves. Their recommendation is to identify a literary agent that you would like to work with at Literary Market Place, which is an important resource for any aspiring writer.

Established in 1983, Beyond Words Publishing is a book publisher that specializes in not only written material that is well-written but also written on topics that are aesthetically pleasing, motivating, and inspiring to their readers. Based in California, in the United States, the publisher delivers photographer coffee table books on various topics, such as diet and fitness, energy healing, meditation, and nature.

Beyond Words Publishing is committed to promoting written and visual texts that paid homage to the living world and also help readers connect to it and further understand the subject content. “The Home-based Resolution” by Martha Krejci, “I Guarantee It” by George Zimmer, and “Loving Your Place On The Spectrum” by Jude Morrow are a few samples of the motivational books that they have been responsible for.

Non-fiction writers working on content related to personal growth and the development of mind, body, and spirit should approach Beyond Words Publishing with a completed submission package, including a query letter and manuscript. They are actively looking for submission and are eager to see if your work in progress can contribute to their portfolio!

Penguin Books was established in 1935, in the United Kingdom, before opening an American office in 1939. Today, the publisher’s U.S. location is in New York, from where they manage and produce many of the titles that they are now so well-known for.

The publishing house has been active in publishing material from multiple genres, from children’s books to non-fiction, and also inspirational and motivational material. Titles such as “Reclaiming Body Trust” by Hilary Kinavey and Dana Sturtevant, “Be Not Afraid of Love” by Mimi Zhu, and “Everything, Beautiful” by Ella Frances Sanders are a number of titles that they have previously published.

Penguin Books does not consider unsolicited submissions of works in progress by writers directly. They encourage writers to go through an established literary agent for more guidance and direction on reaching out to major publishers, like Penguin Books.