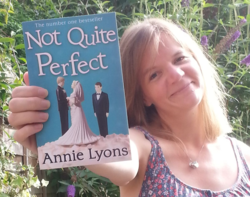 It was 3.56pm on Friday 1 March 2013 when the email arrived but I didn’t see it straight away. We were post school-run and in need of a treat – the children wanted biscuits, I wanted a gin and tonic but settled for green tea. I am the model of motherhood after all.

It had been a tiring week. To be honest, it had been a tiring start to the year but then life is tiring, isn’t it? I wearily note the way my six-year-old son springs out of bed every morning and wonder if I was ever like that. I can’t recall. I’m too tired.

But I digress. The point is that if you had asked me on that particular Friday what I did for a living, I would have flashed you jaunty smile, ruffled the nearest child’s head and said, ‘I look after these two rascals!’

You see, despite having written two books and received positive feedback from most major publishers, I couldn’t call myself a writer because I hadn’t got a deal. A rejection is a rejection. Gushing praise does not send you a royalty cheque every three months. So I was a writer in the same way that I was a baker, gardener and folder of pants (for the record I excel at the last).

And that is why I nearly gave up. In February 2013 I had what my husband poetically refers to as, ‘The Melt Down’. It wasn’t pretty. It was a bit childish to be honest. I think a few cushions were punched and possibly some smaller items of furniture thrown. There were a lot of tears and comforting hugs from said husband.

The trouble was that ever since I’d been made redundant from my publishing job, the fairy godmother of self-confidence had not been kind. In truth she’d pretty much ignored me. So I was writing and loving it but had no idea if what I was writing was any good or if it was merely a decadent form of therapy. People told me I could write, but these were people who loved me and didn’t want me throwing the furniture around.

February 2013 was a turning point because I met an old publishing friend at a party and she told me to join LinkedIn. ‘Seriously,’ she said. ‘There are loads of writers, editors and agents on there. You should do it.’

I followed her wise advice and it wasn’t long before I came across the brilliant Jenny Hutton, who used to work for Mira. We were discussing another book I had written and she gave me the details of her successor, the equally brilliant Sally Williamson and told me to mention her when I made contact. It was the positive exchange I needed and I was encouraged. But it didn’t end there, dear Reader. Oh no. It was the email she sent me at 3.56 pm the next day that changed everything.

She said that she had been thinking about my book and mentioned Carina, Harlequin’s shiny new digital-first imprint. She thought that my first book would be perfect for the list. Would I like her to propose it to them? It’s probably a blessing for Jenny that she wasn’t in the room with me at that moment. I hugged my oblivious children and skipped around the kitchen in a state of high excitement.

On 10th July of that year Not Quite Perfect was published as an eBook. By September it had reached number 6 in the Kindle bestsellers and number 1 in the Romance Chart. On the 18th July 2014 (today!), it will be the first Carina title to be published in paperback. My new book Dear Lizzie was published as an eBook on 3rd July and I’ve got a third book planned for next year.

And it’s all thanks to a wise friend, LinkedIn, a kind editor and my husband. I am a writer and I love it.

Not Quite Perfect by Annie Lyons is out now.