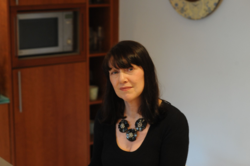 For as long as I can remember, I’ve been fascinated by books – reading them and writing them. I devoured everything by Enid Blyton as a kid and was always trying to write my own full-length mystery/adventure stories.

At university in Dundee, I studied English then landed a pretty cool job as Fiction Editor on Patches teenage magazine. After that, I worked as a sub-editor on a couple of newspapers in Scotland, before moving to Surrey where – in a complete change of career direction – I established Surrey Organics, delivering fresh organic fruit and veg to people’s homes. (My veggie adventures were the inspiration for my very first attempt at a book, which is still in a drawer.)

Then five years ago, I had a bit of a mid-life crisis/wake-up call. It involved a Big Birthday looming on the horizon and the fact that a spell trading the financial markets (yet another career change) was proving stressful and ultimately rather scary. Did I really want to spend my days glued to a computer screen watching financial indices going up and down? Wasn’t it high time I actually got down to business and finally tried writing that book? So that’s what I set out to do.

When I started, I gave myself a year in which to write a book and find a publisher (duh!)  Looking back, I can’t believe how ridiculously naïve I was. It ended up taking five times that long!

Those years were pretty bleak, financially. When my savings ran out, I knew I’d struggle to find a job that would fit around school hours, so I set myself up as a self-employed cleaner. I went out cleaning during the day and used every spare minute in between jobs – plus evenings and weekends – to work on the book. It was exhausting but something kept driving me on – although there were definitely times when I questioned my sanity! I had embarked on a mentoring course with The Literary Consultancy (TLC) which was tremendously helpful – and by the end, I had my first completed manuscript. Becky at TLC decided it showed promise and began sending it out to agents. Seven months of nail-biting and four rejections later, I finally got a ‘yes’ from the wonderful HHB Agency. With their support and guidance I wrote Humbugs & Heartstrings – which took another year – then Elly, my agent, began sending it out to publishers. That was the most nerve-racking time of all. To have come so far but not to make it all the way would have been devastating. Three rejections rolled in as I held my breath.

Then … on 26th August 2014 I received a very special phone call from Elly. She told me that Avon editor Helen Huthwaite loved the book and wanted to publish it. Not only that, but she was setting up a brand new ‘digital first’ imprint called Maze – and she wanted Humbugs & Heartstrings to be the book to launch it! I was so elated, I could barely speak.

The house was frustratingly empty at the time (no-one to hear my disbelieving squeaks of delight) so I went for a long, fast walk in the woods to try and get my head round the fact that finally, finally it was happening! I think I floated most of the way. I got back to the house an hour later and there was still no-one home – so I did the walk again. I couldn’t think what else to do. I had so much nervous energy, I just had to burn it off otherwise I might have spontaneously combusted!!

I’ve been celebrating ever since . . .