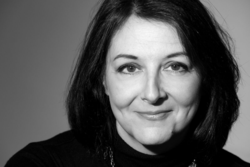 I was 50 years old and since I’d been a teenager I’d had two wishes (well, okay, more than that, but these were the two most unattainable): I wished for a book deal and to see Kate Bush in concert.

I knew both were a long shot.

But thanks to a friend, we’d got four precious tickets for Kate’s first live show since 1979, so, on September 5th 2014, my husband, myself and our two teenage daughters were set to travel from Edinburgh to London for the concert the following evening.

I checked my messages one last time before leaving. There was an email from my agent Joanna Swainson, of Hardman & Swainson, with the subject line: OFFER!!!!

I said nothing but quietly opened the email. I was frightened to call my husband in case it was a mistake – I needed to check it out first. In it Joanna said Sandstone Press had offered to publish my debut novel Truestory. Joanna’s email finished: ‘You’re going to be published. Well done!!!’

‘Come and read this,’ I said to my husband. He wandered across and read the email over my shoulder. ‘Brilliant!’ he said and he kissed me.

But I said nothing to my daughters – I couldn’t really believe it, even though I’d read the email over and over again. This had been my dream for so long. Perhaps I should sign a contract before I told anyone else? What if it was a mistake?

In London we met friends and one said: ‘How are your publishing hopes going?’ The question was so direct and unexpected that I blurted out: ‘I’ve got a publisher for my novel.’

Both my daughters’ mouths fell open. ‘WHAT?! Why didn’t you tell us?’

It had been so long coming. For years getting published had been a dream – literally, because I wasn’t writing, I was just dreaming about it. Then in my mid-forties I began studying Creative Writing, at first with the OU, then on an MA programme at Edinburgh Napier University.

I started taking writing seriously – I had to; studying was expensive and taking up hours a week. I did the MA part-time over two years and in the intervening summer I wrote a novel called Chicken Dust. I entered it for the 2011 Mslexia Women’s Novel Competition and burst into tears when it was short-listed.

As the prize for the short-listing I was invited to London to meet agents – and it was there I met Joanna. She didn’t sign me for Chicken Dust but asked to see what I wrote next.

For my MA major project I started Truestory. When it was finished, I sent it to Joanna, but she had doubts about my choice of narrator and suggested major rewrites. It was very daunting, so I hung fire.

Then, in 2013, I won a Scottish Book Trust New Writers Award, with the opening chapters of Truestory, and was given a mentor. She expressed exactly the same misgivings as Joanna, so a complete rewrite began: In effect I was writing a new novel. This took me another year during which I remember sitting at the kitchen table with my head in my hands saying to my husband: ‘If I ever say I’m going to write another novel do whatever it takes to stop me.’

Eventually in July 2014 I finished the rewrite and sent the first three chapters of Truestory back to Joanna. Within a few days she had asked for the rest of the MS and had taken me on. It was a couple of months later, after a few (heart-breakingly positive!) rejections that we received the offer from Sandstone Press.

It was a long journey and there were moments along the way when I wanted to give it up as hopeless but dreams do come true – sometimes two at a time.