Christine King, winner of the 2013 Piatkus Entice Writing Competition is telling us about her book deal moment. The winning novel, The Blade and the Dove is out now. 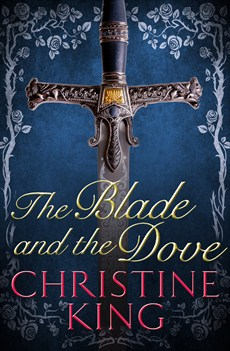 On Friday 27 September 2013 I received a telephone call which completely floored me.

At first, seeing a strange number appear on my mobile phone I was tempted to ignore it but I answered it and a very pleasant lady introduced herself as Anna Boatman, Senior Editor of Piatkus Entice. I listened, puzzled as to why this lady had rung me but then to my astonishment she explained that my book, my entry into their Win A Publishing Contract competition had made it through to the final three.

I’ll be honest here. I did not at first take in anything Anna was saying. The words “Won the Historical Romance Category” did not compute. Then, when she sensed she was dealing with an idiot suffering from some kind of shock, she carefully explained that out of all the other novels she had “pounced” on mine as it was so dark, and quite sexy. She said that the first two chapters of the three finalists' books would be published on their web site and members of the public would be invited to vote for their favourite.

When I put the phone down I was shaking followed very quickly by telling one of my work colleagues who then screamed and announced it to the whole office! (Who all voted for me – bless them!) The following few weeks passed in a blur of sleepless nights and bitten fingernails! Then, on a Saturday night in November 2013 at the Festival of Romance annual dinner in Bedford my name was read out as the winner of the competition and that my book The Blade And The Dove was going to be published!

I can honestly say that night in Bedford was one of the happiest of my life. I was interviewed by Radio Gorgeous; I met some wonderful people and was looked after extremely well by Caroline Kirkpatrick, one of the Piatkus Entice Editors. I was on an absolute high and could have, literally, danced all night!

Since that night the hard work of revising and tweaking began, guided and encouraged all the way by Anna, the book was finally finished and published on 11 September 2014, almost a year on from that first exciting and totally unexpected phone call!

I feel very lucky and very blessed that my book won the competition and I hope the people reading it enjoy it as much as I loved writing it!