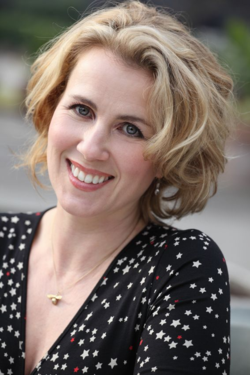 I am lucky enough to have had many book deals in my writing career and each one has been special. However, the great thing about getting older is that you can look back and see the moments that have shaped your life. The moments that changed everything. For me, it was one rainy morning in 1997.

I was living in my first flat – a tiny place at the then grotty end of Portobello Road (how I wish now I’d kept it!) and I’d been woken up by the phone. I had a stinking hangover, and as I answered, I remembered that I’d been drinking in a pub in Soho till late in the night with my friend, Emlyn Rees.

We were both in our twenties and he was working at Curtis Brown as my agent’s assistant and he’d helped get me my first book deal. My debut novel, It Could Be You, was just out. We’d struck a friendship – both being in the same boat: penniless first time authors, trying to hold down jobs whilst writing our second novels in the evenings and at weekends.

The night before, we’d gone out for a drink, which had turned into two, then many more and we’d got onto the subject of our love lives. Our friendship was platonic and professional, but not having any overlapping groups of friends, we found we could be honest with each other.

I couldn’t believe our differing attitudes to dating. Emlyn thought I was crazy for waiting for the guy I fancied to call me (he was clearly never going to) and I thought he was a complete bounder and a cad (to say the least) for leading all the girls on in the office.

The more pissed we got, the more we laughed and Emlyn jokingly said: ‘You know, we should write this down. There’s nothing out there about this stuff. About people like us.’ And that’s where the idea of writing Come Together was born. I thought nothing of it.

So I was surprised the next morning when I blearily answered the phone and it was Emlyn. He was hungover too and having a particularly crap day at work. He lowered his voice from his desk in the open plan office. ‘Do you remember what we were talking about last night?’ he said.

Oh God! I thought. Which bit? What did I tell him? What have I confessed to?

‘You know, the bit about writing a book together. Do you mean it? Shall we do it?’ he asked.

‘Yes,’ I replied, without hesitating. ‘Yes.’

And that, it turned out, was the moment that changed the rest of my life.

After our conversation, Emlyn went away with a bunch of mates for the weekend and pumped them for all their most shameful dating stories. He added them into the mix of his own experience, and two weeks later he presented me with the first chapter of Come Together.

I loved the material from the very first sentence. I remember I’d cycled into Soho to meet Emlyn to get his printed-out chapter (no emailing in those days). I took it to the nearest café and howled with laughter, so much so, that the waiter asked me if he could read what I was reading too.

The chapter was written from the character Jack’s point of view and ended on a cliffhanger, when Jack sees a girl in a bar and she turns around. But there was no description of her, or no clue as to what happened next. I had complete carte blanche to carry on the story as I wished.

I cycled home as fast as I could and immediately set to work, coming up with my character, Amy. She was partly me, of course, but I wanted her to be an every-girl, filled with dating insecurities. But most of all, I really wanted to make Emlyn laugh when he read my chapter.

Fortunately he did and a week later, once we’d put the two chapters together, we knew we had something special. We gave the two chapters to our agents to see what they thought and Emlyn whispered to me on the phone, giving me a blow-by-blow account from the office, as he spied on them reading the material.

Their reaction was beyond our wildest dreams. His agent, Jonny Geller and my agent, Vivienne Schuster, were surprised, but they both loved the material so much that Jonny sent our two chapters straight out to eight publishers.

Within a day, it went crazy and the publishers came courting. Emlyn was presented with a giant blank cardboard cheque at the office made out to us both, whilst a courier turned up at my flat with a pink box filled with sweets and coloured condoms. We couldn’t believe what was happening.

On the day we got our deal, I went over to Essex (where I’m from) to talk on the radio about It Could Be You. I remember playing a request on the radio for Emlyn. He was all I could think about.

My friend called me afterwards. She’d been listening to the interview and was suspicious. She quizzed me about exactly what I thought of Emlyn, because if I was ‘developing feelings’ I had to stop them immediately. I was on the verge of getting a book deal – a big book deal hopefully – a life-changing one – and I WAS NOT, did I hear her? … WAS NOT to blow it by getting involved romantically with my writing partner. ‘Absolutely,’ I agreed. ‘Seriously. We’re just friends. There’s nothing there, I promise you. Do you think I don’t know this could be the biggest opportunity of my career?’

As I went on the bus from Liverpool Street to Haymarket to the Curtis Brown offices that afternoon, my heart was in my throat. As I stepped out of the lift, I heard a cheer and could see that everyone was in the boardroom with bottles of champagne waiting for me. Jonny had just closed a deal on two chapters with Random House.

I remember Emlyn running down the corridor towards me. He picked me up and twirled me round. ‘We’ve done it!’ he beamed. ‘We’ve got a deal.’ And he kissed me.

And right there and then, as my knees went weak, I remember looking into his eyes and thinking – ‘Oh bloody hell. I think I’ve just fallen in love with you.’

And the rest, as they say, is history. Fourteen happy years of marriage later, three daughters and thirteen novels, Emlyn and I still look back on that moment and smile.

Now all we have to do is hide our copies of Come Together from our teenage daughter. But that’s a whole other story….

Joanna's latest novel, The Key To It All, is out now.