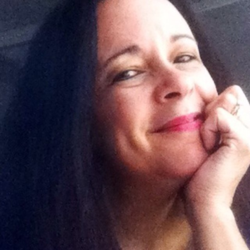 It started off as a morning like any other.

I got up at 4:30am, got dressed, slapped on some makeup, walked the dog, Tweeted for twenty minutes, kissed my husband goodbye, then headed off to work.  Traffic, as always, was screwed.  But living in the Northern Virginia/Washington, D.C. area, you expect no less.

My morning at work was uneventful. I had a cup (well, several cups) of coffee, checked my emails, and glanced now and then at my Twitter feed.

I’d been writing for a long time – since I was a teenager.  But two boys, a full-time job, and a lengthy commute led me to shove my pile of half-finished manuscripts into a box, where I put it away next to the “I’m-going-to-lose-ten-pounds” box and the “I-really-need-to-organize-the-linen-closet” box.

In other words, I told myself, becoming a writer…? It wasn’t going to happen. I didn’t have the time or the energy to make it happen. It was the world’s loss.

But when the boys finally left home, I realized it was my time. Time to write that book, and actually finish it.  No excuses.

So I got myself an agent, and after undergoing some revision, she sent my first and second manuscripts out into the world. Pretty much every editor in New York said my books were good, but that American women “didn’t want to read about British characters in a London setting.”

Um… sorry, New York, but I have two words for you – Downton Abbey. Bridget Jones. I mean, hello? We American women love that stuff!

So when I saw the Tweet from my agent that said, “Check your email, I’ve got good news,” I felt a tiny flare – just a tiny one – of hope. Could it be?

I snuck down to the first-floor conference room and called my agent. Carina UK, she told me, a brand-new ebook publishing division of Harlequin, wanted to buy not just one, but all three of my books. They loved them.

So here I am, launching my second book, Love and Liability, and a third, Mansfield Lark, is right on its heels. I’ve had great response from readers, requests for interviews, and invitations to post guest blogs.

In other words, it’s just a morning like any other…only a lot better.

Katie's first novel, Prada and Prejudice, was released on the 2nd January, and her second and third followed in February and March.