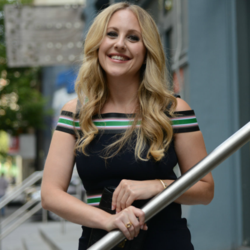 My book deal rite-of-passage happened in two moments, both instrumental in bringing What Pretty Girls Are Made Of to life, though at the time my manuscript was called War Paint – and I was ready to go to battle to get my three hundred pages published!

Part One: The first step for a first-time author is finding an agent. And while I’m a TV producer by day, I had no connections in the literary world. So I queried. And queried … and queried! And from some agents, I received a request for more pages, while others sent flat-out rejections or nothing at all. Perhaps that’s where “ghosting” started – not in the dating world, but in the arts, where “don’t call us, we’ll call you” is a way of life. But on July 4th, 2011, I was thrown a lifeline. I received a rejection to my latest query, but this time, Lucinda Blumenfeld of Lucinda Literary took the time to express how intrigued and inspired she was by the concept of my novel, and with a bit of work (and by a bit, I mean an overhaul!), she could see it doing extremely well in the marketplace. With this rejection came examples, countless suggestions and her well-wishes. I thanked her profusely for the notes (finally – someone told me how to make my book sellable!) and asked if she’d be open to reading it in the future. She said yes, and I now know that she thought she’d never hear from me again.

Almost two years later, on May 6th, 2013, War Paint – completely different from its 2011 iteration – I resubmitted to Lucinda and sent out another round of queries. The response to my updated version was overwhelming and validating, and I finally made it into the room with interested agents. In the end, after multiple offers, I accepted one from the agent who championed my project from the beginning – Lucinda Blumenfeld. And I couldn’t have made a better choice.

Part Two: I equate trying to get a book published to climbing an ever-growing mountain. Once you reach the top of one, you’re at the bottom of the next. Continuously. So I had the agent. And I had the manuscript. And after one more round of smaller edits with Lucinda, we were finally ready to submit to publishers. Bottom of the mountain again. “Why don’t you just self publish?” I heard all the time, along with: “Publishing is dead, anyway, you’d have so much more control if you self published.” Even though the industry isn’t what it was fifteen or so years ago, I had it in my head that I wanted to work with a big house. So Lucinda pitched. And I waited. I have said, through each phase of writing and publishing (because they are different phases), that I’m so lucky to love my day job. If I had to wait home while my book was being submitted, I’d have bitten off all my nails in anticipation. But I was confident in Lucinda’s relationships and that there had been no other supremely successful women’s fiction book set in the cosmetics industry – yet!

In early May, 2014, I received a midday phone call from Lucinda.

“Oh my god, is this what I think it is,” I questioned as I ran into the nearest unoccupied office. Open office floorplans are great – except for when your agent is telling you that you’re going to be published and no one in your office knows that you’ve written a book.

I don’t actually remember the rest of the conversation, but I do remember feeling like I’d suddenly ingested massive amounts of caffeine. Giddy to the point of shaky hands and tears spilling down my face, I wrangled my entire family on a conference call (god knows what bad news they thought I was calling to deliver!) and told them the news.

So now, when I introduce myself and I’m asked what I do for a living, I can officially add published author into the conversation. And it feels wonderful!

What Pretty Girls Are Made Of is available to buy here.