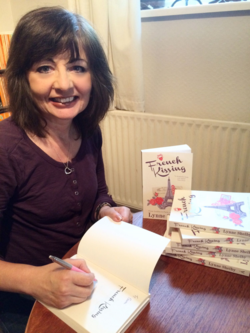 It’s midnight in Paris, and I have just become a published author. I look up at the Eiffel Tower glittering brightly against the night sky, and think that sometimes, dreams really can come true…

It was early last year that I started writing French Kissing, a contemporary romantic novel set in London and Paris, in which two childhood penfriends, Anna who is English and Alexandre who is French, meet as adults when their friendship could become something more.

Some months later, I spotted the Accent Press and Woman magazine Writing Competition for unpublished contemporary women’s fiction writers, with the fabulous prize of a publishing contract with Accent Press and a writing holiday at Chez Castillon, a writer’s retreat in south-west France. The judges were Katie Fforde, Jane Wenham-Jones, Jo Czechowska from Woman Magazine and Cat Camacho from Accent Press.

I sent off my entry – the first three chapters and a synopsis of French Kissing – just before the deadline, and told myself to put it out of my mind. And then, on 8th January 2015, a date I will always remember, I got a call from an unknown number. I answered it, expecting it to be yet another one of those phone scams that are the bane of anyone who works from home.

Instead, it was a call from Accent Press to tell me that I’d won the competition, and French Kissing was going to be published. I’ll never forget that incredible moment of overwhelming delight, amazement and excitement. It had been my life-long dream to be a published author, and now it was actually happening.

Fast forward to August, and I’m in Paris with a group of family and friends, celebrating the publication day of my debut novel in the beautiful city that inspired my story. As I hold a paperback copy of French Kissing in my hands, I’m so very glad that I entered that writing competition.

French Kissing by Lynne Shelby is published by Accent Press and is out now.