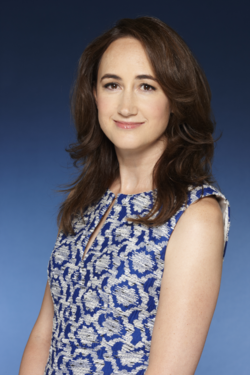 I had written as Madeleine Wickham for several years before Sophie Kinsella was even a twinkle in my eye. I was very happy writing my novels as Madeleine Wickham, and I enjoyed the style – third person, ensemble pieces with a hint of social comedy. But then I had the idea for the first Shopaholic novel, and I knew at once this had to be something different. What I didn’t quite realise was that it would change my life.

I wrote the book in a tearing hurry, totally in secret, with no idea if it would work or not. Only my agent knew I was doing it – my publishers didn’t have a clue. I was a bit nervous about it, because I didn’t know if anyone would get my brand of comedy or find any of it remotely funny. I remember watching the manuscript churn out of the printer and thinking ‘Am I mad?’ When you write comedy, you’re really putting yourself out there.

My agent Araminta took it to Patrick Janson-Smith at my publishers, Transworld (or Patrick Plonkington-Smythe, as he will forever be to me) and he showed it around the company without revealing who had written it. I was determined that it should be judged on its own merits – not accepted purely because I was an established author.

To my delight, they wanted it, and I had the fun of revealing who I was. My editor Linda was especially surprised as we’d had a drink together the night before the Shopaholic manuscript arrived at the publishers, and somehow I had managed not to breathe a word about it. (It nearly killed me!)

It was like having a first book deal all over again and I think I enjoyed it even more. When I’d had my very first book deal, for The Tennis Party, it was an extraordinary whirlwind – the book went to auction with seven publishers bidding and I simply couldn’t believe it. But I was very young and quite overwhelmed and rabbit-in-the-headlights. With Shopaholic I had more confidence and perspective. And it was so exciting and fun to be launching a fresh voice. At that time I thought this was something I would do on the side, as well as writing the other novels. I had no idea how huge it would become and that my pen-name, Sophie, would become bigger than my real name!

Sophie's latest book, Shopaholic to the Stars, came out yesterday.