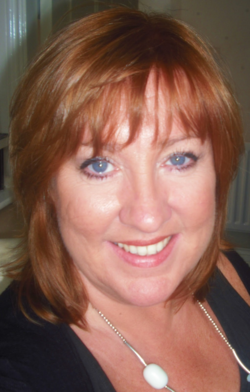 I left my career as a producer with the BBC to follow my dream of becoming a writer. It was a huge step and, like most aspiring novelists, I started by scouring the Writer’s and Artist’s Yearbook for agents. I sent my manuscript to many and after several rejections received a ‘yes,’ from an agent with a great reputation from a big company. I signed up straight away – my agent was really enthusiastic about my book Fat Girls and Fairy Cakes and I felt like my dream had come true.

However, it hadn’t. The book was rejected by publishers and I went from the highest high to the lowest low and suddenly had no book deal, no dream and then my agent said bye bye. For a while I felt so bruised I put my manuscript in the drawer and tried to forget about it. I started teaching and tried to put my writing dream behind me. But then I decided to give it one last chance and sent the book to a new, small publisher who, to my surprise accepted it. I was delighted, but soon realised the process was a big learning curve for everyone – and it took two long years before the book was finally published.  When Fat Girls and Fairy Cakes went on to be a best seller in 2012 my confidence was restored and I am so grateful to my first publisher for spotting my potential – but by November 2013, when my second book Younger, Thinner, Blonder was published, it was time to move on.

I now began the whole process again of writing a novel, sending it to agents and waiting … and waiting. I spent all my spare time writing my next book and trawling the internet for agents. Then, one evening before Christmas, I was sitting up in bed in a woolly jumper surfing my Kindle Fire (I always exude glamour in the bedroom!) when I came across a publisher called Bookouture. I looked through their site and just got that feeling; my mouth went dry and my pulse raced as I scoured the net for information.  And the more I saw, the more convinced I was that Bookouture would be perfect for me. After 10 minutes of solitary excitement I had to wake my husband to tell him. It was after midnight and he was less enthusiastic than I’d hoped and patted my shoulder and went back to sleep. Meanwhile I stayed awake all night, went downstairs, and polished the first chapters of Love, Lies and Lemon Cake – the book that had been running around my brain for ages.

At about 8am it was ready and I sent it to Olly Rhodes at Bookouture. He responded quickly by email and two days later called to offer me a three book deal. It happened so quickly, I was delighted and had to stop myself screaming down the phone, which wouldn’t have been a good move!

Olly asked if I could write Love, Lies and Lemon Cake by February … and it was now December. Well, I wasn’t going to say ‘no’ was I? So work and family life were immediately cancelled and I sat at my desk for three months and wrote the book.

Love, Lies and Lemon Cake was released in June and, as I write, it’s in the top 100 on Amazon Kindle, which feels wonderful.

I had imagined when I first started on this writing journey that my ‘book deal moment’ would be a champagne-drenched-happy ever after affair. But it doesn’t always work out like that and sometimes there are several key ‘book deal moments’ that lead an author to where they want to be.

It can be a rocky road to getting published but don’t let the rejections, the disappointments and the endless waiting stop you from believing in yourself. Just know your ‘book deal moment’ is waiting. It might not be this week, or this year – it might not be a big agent or publisher, but it could be the first vital step on your author journey. Keep writing and believing and it will come.

Sue's book Love, Lies and Lemon Cake is out now.