Another of our new features where we have a nosy inside book groups. We check out what they're reading and what they thought, along with what they're eating whilst chatting and glean useful tips for setting a up a book group. 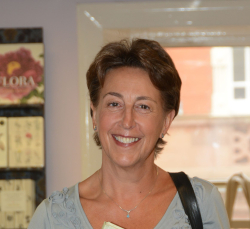 Where, and how often, do you meet?

Our Deepings U3A Monday Reading Group meets on the second Monday of every month in Market Deeping Library, a converted Georgian farm house which is now in a town. We meet between 10.30 and noon. We used to meet in one another's homes, but after a hard fought battle to keep the library open we decided we would rather pay a fee to meet in the library. This is currently £10 per member per year. I'm the youngest in the group (!) and we have members in their 80s. One or two in the group write as well as read so we have some interesting discussions.

How do you decide what you’re going to read?

Once a year we are sent around 40 pages of book titles and descriptions via the library service. All the members of the group choose two books so that there is choice if two of us go for the same book. We don't know which book is for the next month until the meeting and the magic yellow box is opened.

What was the group’s last read? And what was the consensus of the book?

The group's last read was The Lighthouse by Alison Moore which was fortunate for me as it has been sitting on my shelf waiting since it was published.

It generated considerable discussion with many group members polarised in their views. Some of us loved The Lighthouse and others found it such an uncomfortable read because of the seediness of many of the events and characters. We all thought that Alison Moore had written quite a disturbing narrative with damaged characters who felt very real. Themes of belonging and loneliness had us debating just what kind of man Futh was and whether he deserved the life he'd ended up with. We were all agreed he needed to organise his breakfast better! In general we felt there was very little to lighten a sad and depressing read but that it was certainly a book to make us think.

What are you currently reading?

I haven't started the book yet but this month it will be Fahrenheit 451 by Ray Bradbury which again has been languishing on my shelf since publication!

Do you have drinks/snacks at your meetings (tea or wine, cakes or savoury)?

We have tea or coffee and biscuits at our meetings for which we pay 50p.

What are your top tips for running a successful book group?

We're such a friendly group and always have a laugh which is part of the group's success. However, our group leader runs the group really well, so I would say it's a good idea to have someone to lead the discussions and make sure everyone has a chance to speak. We all pitch in with practical elements too – making drinks, putting out chairs and washing up so that there is a shared responsibility for the meeting as well as having a group leader.

In our group, whoever chose the book begins the discussions by giving their opinion and then we all take it in turns around the circle to say what we think. If anyone is away from the group on holiday, for example, they usually send in a few notes about the book that we share so that we know their opinion too and I think that's a good idea to make everyone feel included.

We do have a set of prompts around plot, character and setting that we can fall back on if we are struggling for things to say but as we tend to get off track and debate all kinds of topics suggested by the books we rarely need them and I can't remember what they are! One of the questions is, I know, around casting the book as a film and invariably we try to put Bill Nighy into a role if we can.